Tony Wilkinson
Back to alumni stories 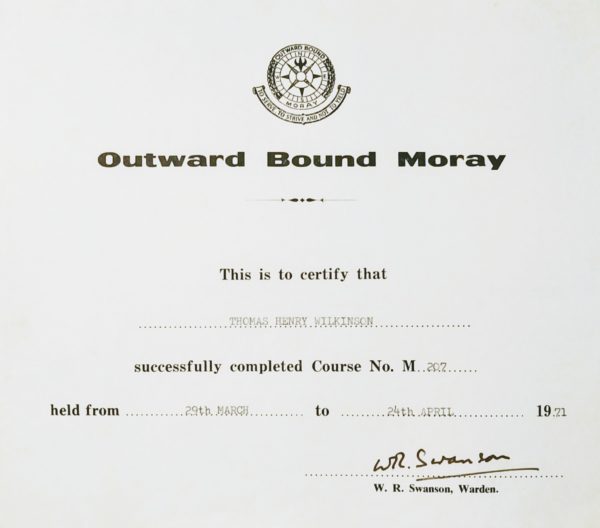 Moray Sea School, M207, 1971. Sadly all I have left are memories. The group photo we had taken on the sand dunes disappeared, even my Outward Bound badge / pin disappeared. Pretty poor housekeeping on my part but sadly that's what's happened.

I do remember Mr W Swanson the Warden of the school. Our watch commander was Mike Anderson. I remember because Billy Higgins named us "Cream Team" and somewhere is the name laid in concrete. Can't remember where. Mike said we should be called "Shit Bins". It's one of those things one remembers. I never did learn to swim. I suppose I was one of those people that cause the instructors nightmares.

Some incidents I recall. I or we managed to overturn a double canoe. It's supposed to be almost impossible, however it remains our record. We were woken at 2am to go and recover the canoe from under the water. Won't do that again. Our watch had an impromptu pillow fight with a neighbouring watch. We beat the hell out of them. The watch commanders broke up the fight and said nothing. That night mysteriously our bed mattresses were missing. We could have one mattress back for each task we competed. Unfortunately we had to roll a large tree trunk uphill, many many time.

Early one morning the dorm door opened. The duty watch commander demanded that we get out of bed. The time it took to get up would be the time we spent under the cold shower, 4 seconds, I lie not, FOUR seconds. Lib, that was what we called him, was elected watch captain. I was vice captain. I remember Dave, Rupert, Steve and Billy. My apologies to the rest of the watch. My friend that I came with was Chris Lamont. We did a 7 day hike in the mountains. I don't recall any issues, certainly not in our watch. I think there were two or three watches in total. Oh yeah, our tent did get blown down in the storm but that's par for the course when dealing with the "Cream Team" .

The surprise of the month, was not really a surprise, more of a shock. On the time table was one block titled "Millie". We asked what it meant and we're told not to worry. That made us more afraid. We asked again, and again we were told not to worry. The day arrived. We changed into running kit. Then the bomb dropped. Millie is / was a "bothy", approximately 4 miles away near the beach. We were then told that there would be a marshal at Millie to count us, (no cheating). The first 4 back could have the day off. It was bedlam, arms and legs flying to be first back, alas not I.

Being a Sea School, sailing was non negotiable. We had the training, we had a very good instructor, we learned the rules, Mike got us the best Cutter and last but not least, we had the Jib. We lost the race. Par for the course for the Cream Team. Our reward, we had to row back from Burghead.

Ah yes, orienteering. That was fun. Really enjoyed that day. Learned to use a compass, to read a map, to plot coordinates and trust your partner. Great fun.

Last but not least. If anyone has the group photo of M207, I really would appreciate a copy for which I will pay printing and postage.