Tom Upton
Back to alumni stories 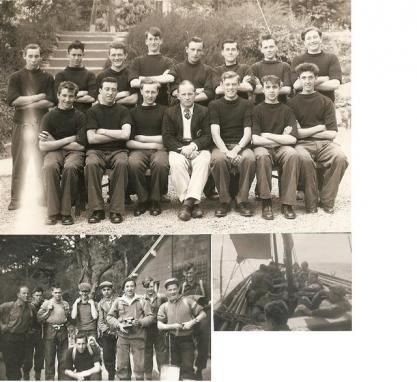 I was employed by the Port of London Authority and it was its policy to send some male staff off to OB just prior to their National Service in order to "toughen them up a bit".

I received joining instructions from the Aberdovey Outward Bound Sea School to travel by train to Penhelig Halt from Shrewsbury. I recall the instructions said "if you find yourself at Aberdovey you've gone too far". Clever eh? Anyway I did manage to alight at Penhelig Halt and with a few others I was marched up to the Sea School to be appointed to Fisher Watch. This was in May 1955.

1). Learn quickly to look after yourself. If someone "borrowed" your socks from the drying-room; "borrow" some-one else's, and if they were better than your's, so much to the good.

3). You have to overcome temporary problems. I recall being as seasick as can be on the Golden Valley from the time it moored overnight off New Quay until the time it was due to cross the Dovey Bar and utterly useless. However upon arrival off the Bar everyone on board had a real job to do and I just had to get on with mine.

4). Be wary of mother nature. On the 3-day expedition, 4 of us were traversing Tarrenhendre on our way back to the OBSS in a heavy snow-storm with fog and very limited visibility with a strong tail wind. The tail wind had increased our walking speed so that we had got further than we thought and the group was too small to split up and try to follow a straight walking line set by compass. We were lost and had long since seen any sign of the over-watching staff. The only thing to do was to get down off the mountain to avoid hypothermia and luckily a short break in the fog allowed us to espy Pennal village. Then it was just a long slog home though we decided to walk along the Happy Valley and back past Angry Farm (?) to avoid being accused by staff of being whimps!
Top photo: Fisher Watch Bottom left photo: Fisher Watch about to set-off on the Three Day Expedition. Bottom right photo: Fisher Watch in one of the cutters.