Stephen Banks
Back to alumni stories 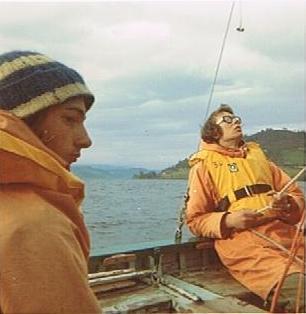 I attended the April 1973 course at the Moray centre and still have some of the photos taken - both the course photo with all the instructors and the photo of my own watch - Cochrane Watch.
The official photos were taken by Studio Tyrell, 106 High Street, Elgin.
I think the only instructor missing was the rock-climbing instructor, who I think was called Ray Button?
Our instructor was a Canadian called Mike Young. I remember in our last week when we had completed the overland trek from Glen Affric to Port Augustus at the southern end of Loch Ness, we transferred into cutters and sailed the whole length of Loch Ness, with an overnight stop (in the boats) at Drumnadrochit. The following day we rowed up the Caledonian Canal, through Inverness, then sailed out past Fort George and then on up to Balintore on the northern side of the Moray Firth. We stopped there overnight (never forget the 'sea-legs'!!!) and that evening Mike showed us how to make doughnuts on a camp fire on the beach. Excellent! We sailed across the Moray Firth back to Burghead the following day.
Brilliant memories and I was so lucky to have the chance to take part. I was sponsored by my employer, the Ministry Of Agriculture in London and was 18 at the time. As luck would have it, my parents lived in Fife so I also managed to get two long weekends at home on the way up from, and back to, London.
I have since emigrated to Perth in Western Australia in 2005 where I now live with my family.
<A link to a number of photos that Steve took on his course at Moray can be found here: http://www.flickr.com/photos/outwardboundgenerations/12284968605/in/set-72157624821185457>