Stanley Lawler
Back to alumni stories 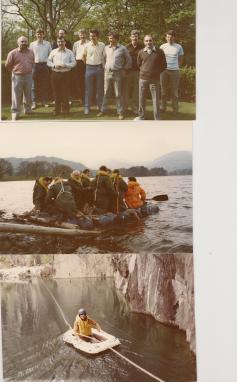 I did a one week Outward Bound Course in the Lake District in 1985, when I was 45years of age as part of a management team building project with my company. I spent the week with eight other men that I did not know and by the end of the week, we could have taken on any task that could be set and I have the pictures to prove it. At the end of the week, I counted ten bruises on my body and everyone brought back a memory.

We sailed across Lake Windermere on a home made raft, canoed down a river into the lake, jumped into the Lake (not being a swimmer) and abseiled down and climbed up just about everything there was to jump from or climb to. This was in addition to learning all the skills needed to map read, climb, cook and eat outdoors and the best of all, sleeping under the sky in April. Believe me, there is nothing like corned beef and mash potato stew at midnight and cold beans and sausage at three o'clock in the morning after being tied to a tree for three hours while the rest of the team have to find you!

I would recommend Outward Bound to anybody...
It is one of the very few long lasting memories I have and I would not hesitate to do it again ( if my legs would let me)