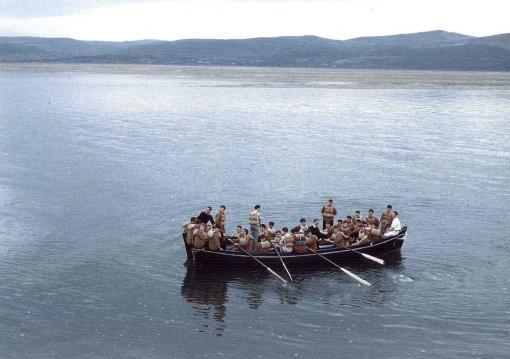 ur small party assembled at Paddington Station for the journey to Aberdovey, the start of a great adventure?

After changing at Shrewsbury and Machnlleth we arrived at Penhelig Halt, it was pitch black, the blackout was still in force and it was raining. We were met by an officer from Outward Bound; there was a hand truck to put our luggage on which we had to push up to the school.

On arrival at the school, "Bryniethyn, we were first fed and then allocated to our billets. I was billeted about a mile further up the road at "Braich-y-cellyn"�. I think most of our hearts sank when we arrived at the billet, it was very bare and not very warm, just a stove for heating. We were all soon turned in.

An early call the next morning, we were told to dress in shorts, singlet and plimsolls and to fall in outside on the driveway. We then had to do fifty skips, then a run down the driveway and back to get a sweat on, then straight under a cold shower, water from a mountain stream. I found this bearable if you managed to keep your head out of the shower which I managed to do for a few days, until the officer in charge noticed me and gave me extra time. However, once you had dried and got dressed after this morning routine, you felt really good. We then marched down to "Bryniethen"� for breakfast. Here I must say that mealtimes were a very civilised affair - this I feel could be due to the "Alfred Holt & Co"� influence.

After breakfast we were told what was expected of us and our tasks for the day. We were told that we were honour bound not to smoke or to drink alcohol and that we would be expected to touch the pennant every morning to signify that we had kept our pledge - everyone touched it.

We then commenced the various activities that were set for us each day. There was of course plenty of boat work, seamanship lessons at the jetty. There was also physical training and walking expeditions up in the hills, but unfortunately our big expedition to Cader Idris had to be cancelled due to bad weather. The highlight of the course was a 3-day trip on either the Prince Louis - a one -time continental pilot boat, or in the Garibaldi - an ex-fishing ketch which I was in. We sailed in Cardigan Bay and anchored off Cricceth. The Garibaldi was under the command of a Captain Hey - a Blue Funnel Captain and the Bo'sun was a rather short Welshman who seemed to finish off every order with "eh what!"� All in all it was a wonderful experience and enjoyed by all except perhaps if you suffered from sea sickness which I fortunately did not.

The weather was very poor time the whole time we were there, and one time we had about 6-8 inches of snow - walking from our billet was not very pleasant!

On Saturdays we had a half day when most of us had a trip into Towyn to take in the highlights of the town - we never found them.

There were a few officers that stood out in my memory. Mr Fuller - in charge, a 2nd officer from Holts and later a Captain - a very enthusiastic man who stayed there until he retired I believe. I will always remember him leaning out of the window and blowing cookhouse on a bugle at mealtimes. Then there was a Mr Goldsmith - a South African Chief Officer who had a little click in the throat that only Afrikaners seem to be able to do. There was a Mr Simon, a 2nd officer who was in the "Glenorchy"� when she sunk. There was also a Mr Duval; a 4th officer who we understood had had a very bad time at sea. I heard in later year I hear he was Landlord of the Lord Nelson pub in Windsor. Finally, there was a Mr Zimmerman - who was in charge of PT and all other sporting activities.

As I look back now, I realise what a great experience and wonderful opportunity it all was, perhaps not fully appreciated at the time. I think the main interest for most of us was to be able to get away to sea to do our bit for the war effort and our love of the sea. Outward Bound also led me to join what many of us regard as the greatest shipping company of all - Alfred Holts Blue Funnel Line.