Ron Marsh
Back to alumni stories 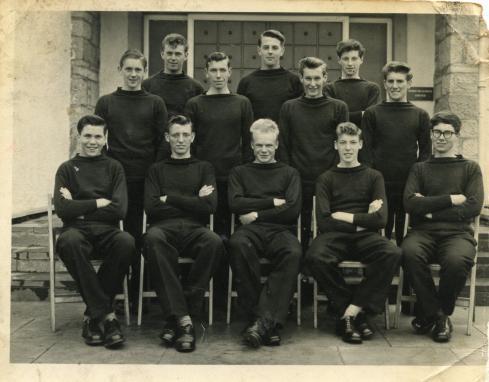 I'll get the boring factual bits out of the way first. I've a month to go until I'm 70 and retired to Stonehaven with my wife, Evelyn. We were both at school in Glasgow at the time of my OB experience.

The attached grubby photo and my lapel badge are the only factual records at Burghead with the Moray Sea School; that was in August, I think, 1958. School was a bit of a non event for me so when I heard of the opportunity for a whole month out of the classroom, away from home, doing outdoor things on land and sea, I couldn't resist the temptation. Archie Jarvie, the gym teacher was in charge of selection and just as I imagined, he pooh-pooh my idea; I had to work long and hard to convince him that he'd be better without me. But, I'd got over the first hurdle.

Memories never give the full facts and there's much of what took place now lost forever but I'll tell you my history of the Sea School. There was one other guy from Albert Secondary, my pal Robert Westland but he and I were apart for the duration of the course; I was fully occupied learning about the course and finding out about my new companions in Keppel Watch. In '58, Moray Sea School was still growing and my watch was housed in what I recall as temporary accommodation at the rear of the main building, memorable as the concrete floor could never be swept to the dust free standards demanded by the officers.

Glimpses emerge now and then; the doctor's examination (outdoors and including a run through the long grass to the village and back and his concern over my racing pulse afterwards, more likely due to white coat syndrome!). We all learned quickly about legendary Rosie, but there was a distinct lack of tales thereafter, due we claimed, to bromide in the tea). We marched to church on Sundays, with the village residents turning out for the occasion. The porridge (to be salted, only) in an enamel basin on the table to which each watch member took his share, or if you were on board Prince Louis, the wee Glasgow cook letting fag ash drop into it and sometimes putting in some food colouring (to make them spew in Technicolor).

The five mile walk had to be done in an hour - up through the woods to the little local football pitch and back, no running.
The hot day the watch went on a hike and one guy took sunstroke. We 'borrowed' a cart from a farmyard, loaded him on and proudly delivered him to the medical room only to find the angry farmer looking for an explanation, and a cart!

The day we set sail in cutters in heavy conditions (a 'dicey do' as the ex-RN officer said), joining the search for a missing girl, later found drowned some way down the coast. I think we all learned something of sadness and fear, on top of seasickness. Somehow, there was a young German on board who gave us a laugh referring to the shiezenhawks.

Seasickness is prominent in my memory and I still know to do it over the leeward side. It was a Sea School after all! Prince Louis was the prime culprit, having had ballast removed to allow access to Burghead Harbour and in consequence rolling like a barrel. Outward Bound introduced me to sailing and I remained part of the cloth & string brigade ever after. I was proud to announce at the time that I was the only boy on board who had not vomited but secretly, I wished that I could, as I felt every bit as bad as the rest!

It was all part of the very necessary learning curve and no doubt taught me much that I applied throughout my life. Some talk of sailing as hours of boredom interspersed with moments of sheer terror. Although never bored, I did have tricky moments. Sailing into Inverness, the wind dropped, the sails sagged and guess who was on the wheel. The First Mate (who terrified me) screamed through his huge red beard 'steer the !”^%&$ thing – you're making a fool of me in front of the crowd!'. He was the examining officer when I had polished the metalwork in the heads – he spread grease everywhere and told me to do it again. Orders are orders.

On board we were 'sea dogs' but on land, 'Sherpas' Although far below the standard of our Tibetan friends, we were set (and accomplished) a challenging role. On to a coach one morning and knowing nothing until we were dropped off in the middle of nowhere, given an OS grid reference (near Ullapool we discovered) and told to meet the boat at Invergordon three days later. Insufficient time to take roads, we headed out alone overland. Slept in a derelict bothy on the first night, but under the stars thereafter (moving out the dung suddenly lost its appeal). We met Prince Louis after an exciting hike and were allowed to go below and nurse our blisters on the voyage back to Burghead. At least, the watch leader got some food. You see, we ate all the good stuff on day 1 and had to last out on digestive biscuits and Granny Smiths which made him very sick.

There are memories of many people and perhaps I'll concentrate on the officers – they were role models after all. McKenzie was an Army man – smart, strict and a bit remote. Many names have gone but the faces still appear – The Captain and First Mate who seemed to be at loggerheads throughout, the full time Prince Louis crew, recruited around Burghead and mostly called Main. Montgomery, a reputed close relative of the Viscount was a character too. He would show off his conjuring tricks, frequently snooker balls from out of trousers.
Athletics took a major place in the programme, with the Commando course being a severe but necessary test. A huge swing, taking you to a high wooden platform was my Nemesis, particularly as I was told it had to be done and only one boy had ever been killed. I don't know how, but I did it!

Monks from Pluscarden Abbey were invited one day – some were in their element flushing and reflushing the heads in Prince Louis. Evelyn and I have returned the visit to their home several times – their personal peace, happiness and lack of hurry is amazing with the mason knowing that he would never complete his job but that it would be done one day. We visited too, Gordounstoun School one day where we were made pupils for the duration. Kurt Hahn, the school founder and retired headmaster was on a visit too. He taught us a method of physical and mental relaxation that day, all these years before the current fashions appeared.

As you'll gather, I'm moving towards a description of what I gained from Outward Bound. I may not be the fittest or brightest of the pack, but I learned to push for what I wanted in getting a place on the course, then to set and reach my own goals, irrespective of how 'good' those around me were. Competition is to me a personal thing and I'm satisfied that I've achieved what I set out for in life. In addition, the event lasted a mere month when I was 16, but I have strong memories of the course and gained a significant amount to take -me through life.

I consider my sons have benefited from my experiences too, being outdoor, active guys with (sometimes too) similar personalities to me. Today's Health & Safety culture may go too far at times; I fully believe that growing minds and bodies need exposure to danger to learn how to handle the world. My memories of the physical far outweigh the more recent clutter from computers, electronic games and the like that fill young minds now.

Outward Bound Moray, I thank you sincerely for what you gave me. As the lapel badge that I still wear states, 'To serve, to strive and not to yield' – I can't find a better motto!