Roger Norris
Back to alumni stories 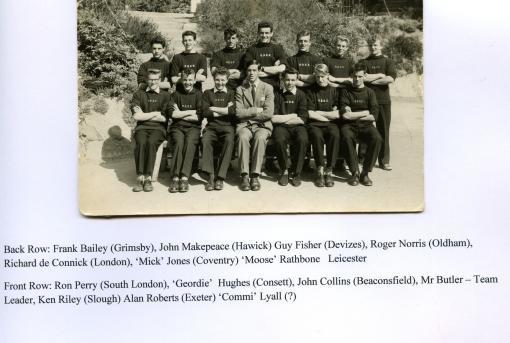 On 7 May, 1960 about 100 young men, some still at school, others who had recently left made their way from all over the country to the Outward Bound Sea School at Aberdovey, Wales.
At the same time as they were travelling Wolverhampton Wanderers were playing Blackburn Rovers in the FA Cup Final at Wembley Stadium. (3-0 to Wolves)

I have attached a copy of a photograph of the members of "Drake Watch"� who lived and worked together for 4 weeks.
Each member of the watch was dependant on all the others for "survival"� especially in Snowdonia and whilst sailing the Golden Valley, a two masted sailing ship
The weather was very hot and we did our "skinny dip"� in the river Dovey about 0630 hours, We also carried bricks from the entrance of the centre to what we were told would be the Chapel. We also started to dig a hole that we were told would become a swimming pool. We jumped out of an upper storey window onto a sheet held by other members of the Watch, That was putting your trust in your colleagues! We also trained at running out the hosepipe and using the water pump, in case there was a fire in the village. Drake watch was a rambling team. We were wisely advised, "The more you take , the more you carry"�. We slept under self made bivouacs, a poorly made roof could have meant a wet night. However, the highlight was a week on the Golden Valley. How to survive in a gale. Sitting up all night watching the ship drag its anchor, in a very rough sea, after the "engineer"� allowed his "oily rag"� to go up the air inlet and block the engine. There wind was too strong for the sails and we were perilously close to the Pwhelli coast. We didn't wash much, either on the ship or whilst rambling. We always seemed to be wet through on the ship because of high seas and spray and we had little facilities to wash when rambling. Cader Idris was a great challenge! The course certainly taught me the value of teamwork and how to tolerate others. At the end of the four week course we were like Tarzan and his mates.