Roger How
Back to alumni stories 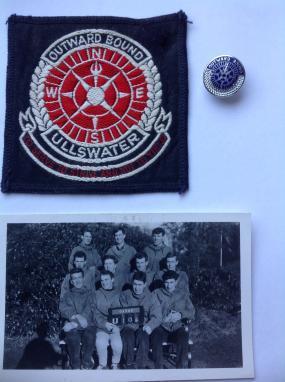 I was an 18 year old Police Cadet when I did my Outward Bound course U 104 at Ullswater from 22nd November to 18th December 1965. I am now retired but during my police service I attended numerous courses, none as memorable as Outward Bound. I had been walking and camping in the Lakes, Yorkshire Dales and Peak District the previous year, with friends, but that was in the summer and in no way did it prepare me for the conditions Course U 104 had in store for me.
On arrival I was put in Oates Patrol with 9 others and to my surprise was elected Patrol Captain at the end of the first week. That first week was extremely cold with some snow but crisp, clear, sunny skies, with spectacular views and scenery. If I recall correctly our first 3 day expedition was at the end of the first week following fairly extensive camp craft and map reading exercises. It was so cold it was necessary to keep our boots in our sleeping bags at night to prevent them freezing.
The second week really was something different, when the going started to get tough, as there were exceptionally heavy snowstorms that, we were told, were the heaviest for well over 30 years. All the local roads were impassable by vehicle and the local farms were cut off. Our prepared timetable was temporarily abandoned and for a few days we were utilised assisting the local farmers to rescue sheep trapped and buried in the deep snow on the hillside farms. A majority were successfully dug out and rescued alive but unfortunately many had already died. The farmers were also unable to transport their milk churns to the collection points so we were tasked with carrying the churns, sometimes over a mile, through the deep snow, on stretchers and improvised sledges to a point where they could be collected and then return empty churns to the farm.
I recall that the next expedition was in really heavy snow which reduced visibility to the point it was impossible to see more than the person in front of you and for safety, so as not to lose anyone from the rear of the patrol, we had to regularly "number off"� and eventually rope ourselves together in a line. Visibility being so poor we were navigating almost entirely on compass and time. At night we camped in thigh deep snow in the shelter of sheep folds. I also recall the lake was frozen over in places and canoeing was a freezing pursuit, particularly if you were unfortunate enough to capsize. The benefit of the snow and ice was the experiences we had glissading and using ice axes on the slopes for fun. Then there was the Fell Run which, as a bit of a runner, I thoroughly enjoyed but there were a lot of guys who declared they would be more than happy never to repeat the experience.
The last week was still really cold, particularly at night, but a bit more wet and slushy in the daytime. The equipment was, no doubt, good for the era, cotton fabric tents ( no fitted ground sheet) which ran and dripped inside if you were careless enough to touch the sides and "Aqua Scutum"� suits which were no match for modern protective outdoor clothing. We had rapidly learned to be very careful and look after and respect our equipment.
That reminds me that each patrol was responsible for various duties around the centre and our patrol, amongst other things, was responsible for the cleanliness and tidiness of the boot room and basement. Imagine what that was like with 60 plus dirty, wet boots, suits, and other smelly, grubby equipment. I think we drew a short straw with that one.
50 years on I look back with very fond memories of the course which left me with lifelong transferable skills which have helped me deal with many of life's challenges, both from a career and personal point of view. It also cemented my love of sport and outdoor activities. I have since worked with Raleigh International in assessing and training young people going on Raleigh expeditions abroad and after retiring from the police taught fitness and outdoor activities on the Public Service Course at the local College of Further Education.
Thanks to Outward Bound for the experiences and opportunities it opened for me and for young people today in preparing them for adult life. Long may it continue.

I am top left in the photo and still have the badges.