Paddy Murphy
Back to alumni stories 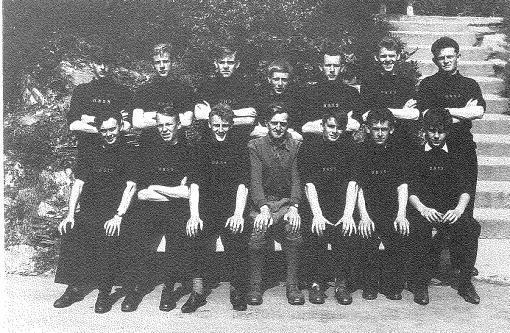 My old Grammar school headmaster thought that a month at Outward Bound would prepare me for the imminent P.E course at Loughborough, so almost without debate I was sent to Aberdovey, backed by the 38 fee from Devon Education Committee, with borrowed boots and a new anorak, bought with my paper round money - 1.50 a week by the way.

My Mother stuck a few Mars bars into my (borrowed) rucksack, and I was off for the month to join 120 young men, the majority of whom were younger than I, and bore regional accents that it took most of the 28 days to fathom - as mine did I expect as Devon "dumpling".

Every day presented challenges to your physical fitness, courage, teamwork and the capacity to tackle new skills, and the constant risk factor reflected the tenor set by the instructors, many of whom were ex-Servicemen. "Health and Safety" was an unknown expression in those days.

We experienced the full range of emotions and fears, from low-key dramas to near disasters, especially in the estuary or out of sea, but that was the name of the game, to "serve and strive" as per the logo, and find our inner selves. For most of the lads, it worked, and I would say that "men" boarded the return train on day 28, where boys has disembarked on day 1 - a fanciful claim perhaps, but I believe it.

If there was downside at all, curiously (and with a hefty slice of hindsight) it was that the weighty emphasis on physical endeavour meant that scant attention was given to appreciating the stunning scenery that we trekked, sailed or rode over. In fact, once when I went back, a few of us summited Cadair at about 7pm on a glorious evening. For about 5 minutes at the top I stood looking around me, bewildered that I had such little recall of my 1961 visual experience.

Back in 1961 we virtually ran down Cadair's flank, and then had races up the other side, to Graig Goch, probably organised by Cy Hornsby, the American instructor who was such a grand role model; we worshipped the ground he walked on.

Our watch, "Jellicoe" was composed of the least tall brethren on the course, so we were the "pony" watch spending more time with the horses than others, mucking out, feeding and grooming, trekking the Dovey forest and enjoying the exhilaration of galloping the sands at Towyn. We never had saddles or stirrups, just a blanket and girth, so you rode with knee control, or no control at all. When it rained or you splashed through the surf on the beach (the horses headed straight for it) you simply slid off, hanging on to the rein vitally, as taught, to avoid being trampled.

In the cutters, our sailing master was I think, a Mr Winchester who surely must have been ex-Royal Navy, given his forceful instruction and technical know-how. He cajoled us into shape and the sense of success gained from "running" and "goose-winging" brought some of the best moments of all.

Suffice to say that ever since 1961 I have idealistically preached that every 16-18 year old should attend an O.B course between school and work or higher education. That's the dream - but who can know how many more fulfilled people there would have been given the application of such vision on a national scale?