Michael Tebbut
Back to alumni stories 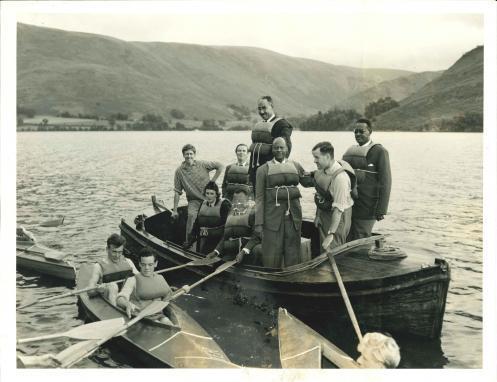 A chance encounter in 1957 with Peter West who had just returned from the one month course then run by the Outward Bound School, Ullswater led to me sitting in front of Jeff Douglas, ex RM, then Warden of Ullswater, and being asked, amongst other things, if I was a climber. Sensing he was querying rock climbing rather than the social variety, I had to say ‘no’. His terse reply, “Mallaig – 0830 – 23 May – 42 Marine Commando”, led to 14 unforgettable days in Skye on the Black Cuillin.

Safely back at Ullswater in time for Course U19, the Chief Instructor said “we’re climbing on Pillar with t’warden tomorrow”. Next day, half way up Pillar Direct with Jeff in the lead, I said “I s’pose the Warden wants to know if I learned to climb in Skye?” “No” said John Baxter,”he fell off this a year ago, you’re here to hold him on if he does it again”.

There started five glorious years of involvement in doing what Kurt Hahn liked to call ‘character training through adventure’. In today’s world we might feel that had to be phrased slightly differently, but the essential message remains the same. In later years Hahn asked me to meet him. In best OB tradition the invitation was succinct, “Brown’s Hotel, breakfast, 0800”. It was a truly fascinating occasion.

In those distant days the standard course at Ullswater of four weeks started with a three day scheme into the hills with a patrol instructor and 12 boys, carrying all kit, in 3-man OB-designed tents that would be their home for 10 days of the whole course.. Week 2 included the Tod scheme when each patrol instructor selected an area and placed his boys in a remote location on his own with a bivouac, rations for 24 hours and instructions to return to base by 1200 next day. For some it was the supreme challenge of the course. For others that test came with the requirement to give a 10 minute ‘lecturette’ on a subject of their own choosing, or their first rock climb on the nursery slopes at Gowbarrow.

Meanwhile instruction in canoeing, sailing, first aid, compass and map work, physical fitness, public service including Mountain Rescue were woven into the course. Training conditions stipulated no alcohol and no smoking. A mother from Doncaster insisted on sending her son a packet of 20 fags a day by post and ignored our requests to refrain. Eventually she came to retrieve him by taxi, which tactlessly rammed the Warden’s car on the way in. As she left with her smoking son she said “eeh, it’s such a pity he couldn’t have stayed, he’d have done so well”, the irony of which appeared to be completely lost upon her.

By the end of Week 2 we aimed to have 100 boys pretty fit, trained to deal with the challenges ahead, and committed ideologically to the second half of the course where the real testing started. The highlight of Week 3 was a four day stint under canvas in Borrowdale when the whole course moved out to undertake serious climbing and canoeing. Shepherd’s Crag next to the hotel was a favourite, with climbs of all grades, whilst the canoes made use of the River Derwent, sometimes as far down as Cockermouth.

Week 3 was often a very fulfilling week for we instructors. The flowers began to bloom, so to speak, friendships also blossomed and the cohesion of a purposeful unit became apparent. Problems were ironed out and by the beginning of Week 4 everyone was ready for the Final Scheme. This was for 3 days, in groups of 4, over mountainous routes of up to 60 miles. Instructors hovered discretely out of sight, no mobile phones in those days. Feats of courage, self-sacrifice and most importantly self-knowledge were often to be encountered during that final exercise and when it was time for the final gathering, the awards, and the celebration, the air of confidence and achievement was palpable.

For one course I was seconded with another instructor, George from the Eskdale School, to assist with a Girl’s OB Course at Monk Coniston. It would of course have been potentially colleague-damaging to express enthusiasm, so I allowed myself to be bribed by the offer of the Ullswater Land Rover for the duration, on the grounds that it had “Womens’ Overland Himalayan Expedition” plastered on the panels - another day, another story of true female grit and determination.

George and I were tucked away out of sight in a subterranean room beneath the dining room and reinforced the delicate fare on offer to the girls above us by cooking hefty stews and robust Cumberland sausages on primus stoves, the aromas from which used to float through the ancient floorboards to the envy of many of the girls.

After three years at Ullswater, where I succeeded in getting the Deputy Cook to the altar at Watermillock, and she still turns out a fantastic brand of flapjack, staple diet of OB Instructors, I moved to the Outward Bound Moray Sea School, sadly now no longer, as Chief Instructor. At our disposal were such items as the 160 ton schooner ‘Prince Louis’, five sailing cutters, a powerful MFV, the Cairngorms and more or less anywhere else in Scotland such was the goodwill. As with Ullswater a core of experienced instructors was augmented by temporary staff from a wide variety of backgrounds who brought fresh ideas with them and kept us regulars from becoming stale. The Moray version of the Ullswater four day scheme was to cross Scotland coast to coast with a combination of sailing, canoeing, walking and cycling.

Today I still receive letters from mature men and women expressing their gratitude to Outward Bound for what it did for them some fifty years ago. It did a lot for me too, and when I finally had to turn elsewhere to accommodate the needs of a growing family I also became only too aware of the ability of this great movement to equip a person for the adventure of life.
Posted: 29/05/2012