Michael Painter
Back to alumni stories 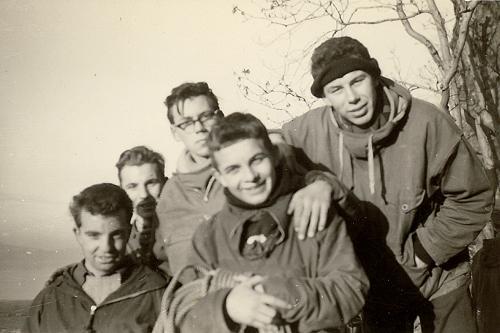 On a recent UK holiday I was driving around the Ullswater shoreline when my wife suddenly said, "Was that the Outward Bound School you said you were at years ago?" We reversed and drove into the entrance. It was 52 years since I had last seen the place and it certainly brought back some memories.

We decided to look around and the receptionist politely asked my name and when I had attended. "Michael Painter, January 1958," I replied. She went to her computer, within seconds confirmed this was correct and gave me a visitor card. She then asked if I was interested in getting a copy of my passing out report and a group photo. I smiled, "I would certainly be interested, but I doubt if it will be very flattering." She raised her eyebrows questionly and I explained, "I didn't conform, I was a rebel." Her eyes twinkled, "Well you don't seem much of a rebel now; let's see what they said about you back then."

When we returned to reception she was waiting with the photocopies. I had difficulty recognising myself in the photo and as I suspected, the report was very critical of my behaviour. I had never previously seen it. It said I was frivolous, played the fool, became bored easily and wasn't interested in taking the initiative. The report concluded I had latent leadership qualities and if I became more serious then maybe there was some hope for me. I couldn't help smiling and passed the report to my wife. "What do you think; is this me today?" She couldn't believe it was a report of mine and laughed. "Wait until I show this to the kids!." We chatted a while with the staff and I passed on some anecdotes. The receptionist then asked if I had visited their website - I hadn't - she then asked whether I would be prepared to pass on my story. I said I would think about it. A toned down version follows.

The point I want to make at the outset is that many young people are confused, lack direction and are rebellious when they are in their teens. I was no different. They need something or somebody to jolt them out of a rut of negative behaviour. They need a worthwhile goal in their lives. I don't know whether Outward Bound provided this for me but it certainly contributed to my future development.

At 18 I was a tall skinny youth with a Tony Curtis quiff and an unfortunate habit of saying what I thought -- often at inappropriate moments. I remember I started off on the wrong foot from day one. We must have missed the bus or something because a canvas topped Land Rover came to get us at Penrith. There were about six of us greenhorns waiting to be picked up. The driver proceeded to demonstrate his daredevil car driving abilities. The vehicle hurtled down narrow lanes and screeched around bends. We all sat in the back as best we could - there were no seats - and we were thrown from one side to the other. One small kid hit the tailgate with a painful thud. Eventually the Land Rover pulled to the side of the road and the driver inspected the tyres. They were smoking and a tiny flame came from one. I can still smell the burning rubber. I couldn't resist muttering to no one in particular but loud enough for him to hear, "Let's hope this f"..g idiot is not going to be our leader!" He didn't say anything but sure enough he turned out to be my Warden!

January that year was exceptionally cold and most of my memories are of being unbearably cold. The six o'clock showers in the dark - frozen pipes permitting - were not too bad but I remember most vividly our three-day exercise when four of us had to navigate a route up mountains and down fells using the skills we had learnt. One night was particularly cold. We had been walking all day into driving wind and snow and were absolutely knackered. I remember when we went to erect our tent I was foolish enough to take off my gloves. My hands stuck to the aluminium tent pole and the skin was torn off.

That night it was my turn to prepare the evening meal. I heated up some soup and then decided to add some oats. My attention, for some reason, became distracted and the congealed mass burnt in the pot. In disgust I threw the pot out of the tent and we went hungry. In the morning I also discovered I hadn't taken my boots to bed with me and they were frozen solid. I tried to thaw them out over the Primus but only succeeded in burning them. Someone next morning found the pot outside the tent and turning to me said irritably, "You made this bloody mess, you clean it up." It was frozen solid and resisted all attempts to clean it. Finally in desperation I took my ice axe and try to chip the mess out. I then must have gone slightly crazy or something because when we got back home and I unpacked I was amazed to see that the pot had at least 50 holes in its base. It was otherwise quite clean, but I have no recollection whatsoever of what I had done. I later learnt that the pot was preserved and used to instruct new recruits of the dangers of what extreme cold can do to you!

I also remember we set out to climb Helvellyn via Striding Edge one day. It was a glorious morning but as we started across the ridge the weather closed in. The wind got up and it started to snow. Pretty soon it was a wipe out. We silently struggled on through the stinging near blizzard in single file. I dared not look to either side; it was too terrifying. I can honestly say I was scared shitless. But it was great when we finally got back to the School and we all laughed and joked about our experience.

I also remember my canoeing adventure. They decided we would descend a beck down the bottom end of Ullswater and paddle back to the School. The canoes were two-seater and were painted canvas affairs with flimsy timber framing. I chose the front. I had a sense of foreboding when we got to the side of the beck. It seemed like a raging torrent. We launched our canoes and tentatively set out. I remember having the foresight to hold back to last and see how they went. Almost immediately canoes hit rocks and sank. I remember trying to avoid a similar fate. Of the ten or so canoes that set out, only three remained by the time we entered the Lake. We paddled steadily and I noticed it was clouding over. Soon a breeze sprang up. It was excruciatingly cold. The wind freshened and whipped spray from the surface of the Lake and as it landed on the canoes it immediately froze to ice. The going got tougher as the canoes got heavier and my anorak became stiff from a coating of ice. I looked over at the other two canoes. They waved to me but I could see they were, like us, close to panicking. One of the canoes gradually pulled ahead and the other fell back. My companion and I slogged on it seemed for hours in solitude. My arms grew stiff and I thought I might drown. The thought gave me new strength. My Dad had been drowned in the icy North Atlantic and I thought, "I can't let this happen to my Mum again".

Eventually we saw the School and a group of people on the shore. They were waving and cheering. We renewed our efforts and eventually in a state of utter exhaustion beached the bloody thing. The ice was so thick on our anoraks we were cemented to the canoe and we couldn't get out. I had to be prised out. I remember being given a cup of tea and a piece of cake by one of the catering staff as we walked up from the waters edge accompanied by claps on the shoulder and congratulations. I remember I made a point of avoiding eye contact with my Warden. But it was still a grand feeling.

They had arranged some sort of obstacle course we had to complete each morning before our shower. Lifting weights was part of the torture. They were a series of lengths of water pipe with two cast concrete ends to them. The weights had been painted on them. I remember our Warden going to the biggest; I think it was 110 lbs., and lifting it above his head. He told us he expected us to be able to do the same by the end of the course. I tentatively tried to lift it myself when no-one was around. I failed miserably. I decided I would successfully lift it by the end of the course - and I did!

I think the only exercise I really enjoyed was the cross country race. I admit I wasn't very enthusiastic about it initially and soon got a bad stitch. I noticed all these kids passing me with earnest faces. They seemed like they were actually enjoying it. So I put my head down and slogged on. Presently the stitch passed and the going got easier. The sun came out and I noticed I was passing guys. I got my second wind and the rhythm of my running improved. I increased my pace and soon I was flying past the field. It was a most exhilarating experience. Presently I saw we were approaching the finishing line and I further increased my pace. I was dashing past dozens of exhausted runners. When I passed the finishing line I honestly felt fresher than when I had started. I didn't win the race but I learnt something more valuable about myself. I had discovered one of my strengths. I had stamina.

After the course I changed my group of friends. I went on Aldermaston "Ban the Bomb" marches and joined CND. I took up pot-holing and joined BSA. I took to reading New Statesman and flirted with communism. I also decided to get myself a university education. But the most important decision I made was to emigrate to Australia. I have never regretted it.

I believe Outward Bound was the catalyst I needed at that stage of my life. I was a city boy, in with the wrong group. Outward Bound served as something of a boot camp for me. It introduced me to an exciting alternative lifestyle which at 70 years of age remains with me today. Revisiting the Lakes and climbing all those peaks again recently with my wife was an experience I thank Outward Bound for.