Michael Fisher
Back to alumni stories 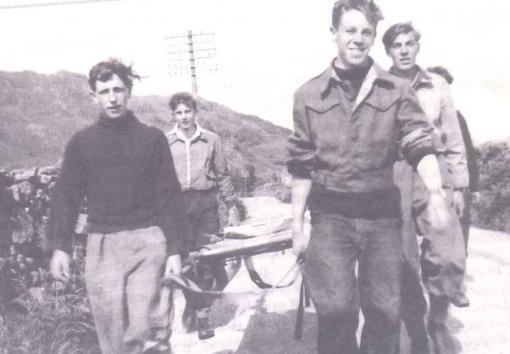 I lacked but just one month from my eighteenth birthday as I entered Eskdale for the first time. Six months or so earlier my employers had selected me, from among two dozen or more apprentices, to go to the Outward Bound Mountain School.

In early June 1952 I left home for what turned out to be the most significant and life changing time in my life. I was seventeen and the experiences of the following four weeks were to have a profound effect upon the direction of my life.

For four weeks I walked, ran, climbed and swam. I learned to read maps with a critical eye, to cook on open fires at ungodly hours of the day, to live in barns and sleep in the hay and in tents and under the stars in rough bivouacs. I learned the rudiments of mountaineering and rock-climbing. The school came to be known to us and many across the world as OBMS Eskdale. To me it will always be quite simply – Eskdale.

For many years I cherished a slim, cheaply produced “exercise book” style diary. One day I could not find it. It was mislaid for several years but it finally turned up, in the way these things do, buried amongst old documents. The cover is of a dusty light brown colour and the words “Outward Bound Mountain School” are plainly printed thereon. The book was issued to me by the school staff and I was urged to keep a diary therein, as were all the other lads on that course. In that book, I penned my thoughts and impressions of the twenty six days I spent at the Outward Bound Mountain School in Eskdale:

Friday 20th June 1952
It’s a quarter to six. It’s damp and there is mist swirling around the summit of Irton Pike. The sun has been up for some time but you wouldn’t know it. We broke camp. That’s a pompus way of describing the bundling of a wet bivouac tent and stowing it and its poles in our three rucksacks together with a couple of pans and mugs. We’d slept fitfully but it hadn’t been too bad. Mummery patrol tramped back down the hillside, through the conifers and along the road to Eskdale Green. I was not in the best of shape. I had a severe pain in my heel and had walked with a pronounced limp back into school. A quick visit to the Matron and a diagnosis of a bruised Achilles tendon which I was advised was “not serious” followed by breakfast at eight. Wonderful!

Friday 27th June
After dinner I got a long climb in with Eddy McGaul and Mr Lagoe on Arrowhead Ridge. Mr Lagoe said it was graded “moderate” but he judged it to be “difficult”. The rock was cold and wet to the touch but my trusty tricouni nails bit into the small holds and I confidently climbed ahead. I led up the first pitch and belayed to a convenient rock spike, then brought Mr Lagoe up. I became second man with Mr Lagoe now in the lead. He went ahead and when he had taken his belay I brought Eddy up to me. At this point the weather cleared, the mist parted and the view down into Wasdale was spectacular. The scree below us fell away in a long sweep of some 1600 feet (485m) down to the waters of the lake which then stretched away for three miles towards the distant sea. The sense of exposure was immense. I loved it. I had never been so high and so precariously perched above such a tremendous drop in all my life. If this was rock-climbing, I was sold on it!

Thursday 3rd July
Guess what? We ran around the tarn again at some unearthly hour of the day. Then we went for a swim...oh! Delight! An unmemorable breakfast at eight o’clock was followed by Parade and Prayers as usual on the North Front at 9 o’clock and Lo! And Behold! The Long Jump with Mr Walker! Once again I recorded an improvement over my last High Jump, this time the record shows I had levitated myself to an incredible 4ft2in! Almost into Earth orbit. Is there no limit to this lad’s abilities?!

Two weeks after my return from Eskdale and shortly after my 18th birthday, which is 14th July, I was called for my medical exam prior to “call-up” for my two years of National Service. I intended to volunteer for three years’ service as I wished to join the RAF so that I might have a chance to fly. Three years was the minimum required to be eligible to fly because flying personnel were required to be professionals and professionals signed on for a minimum of three years.

During my “check-up” I had to answer several questions about the diseases I had suffered during the period of my life leading to this point. One question was “have you ever had rheumatic fever?” I answered “Yes!”

The selection board immediately lost all interest in me and I was given a purple card with GRADE IV written thereon. I was exempt from National Service on medical grounds; unfit for service! For the next two years I would be required by law to show my card to any policeman who requested it, at any time... otherwise I would be suspected of being a “deserter!”

Those two years were difficult in many ways due to these events. Many people knew or could surmise that I was of military age and would ask why I was not in uniform. Such situations were often embarrassing to say the least.

I was a bitterly disappointed young man having just returned successfully from a mentally, emotionally and physically testing time in Eskdale, easily comparable to the induction process required of National Servicemen. I found it difficult to understand how I could be a “reject!” It all seemed to be very unjust.

However, it all turned out for the best as it placed me in an advantageous position with regard to my peers. I had been given a two year head start on them in the workplace and at the end of those two years when I should have been away and “standing still” in my career as a metallurgical chemist, I forged ahead and soon found myself in charge of men much older than myself who had been forced to put their lives and work “on hold” by the mandatory two year interruption.

While other young men “found themselves” during their National Service, I was free to expand my own horizons by becoming a proficient rock-climber and budding mountaineer. I had already “found myself, I just needed a little time to adjust to my new circumstances.

Yes... I have frequently looked back, but never with any sense of regret as to how things turned out.

The bitter disappointment I felt at my rejection for National Service quickly faded into insignificance as I set out to explore the mountains and the moors of The British Isles and, once again, thanks to them, I found myself not wanting.
Posted 21/01/2013