Martin Smith
Back to alumni stories 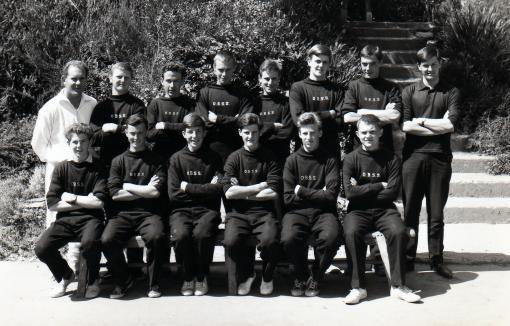 To the best of my memory and calculations I joined the Aberdovey School in 1965 with the guys in the photo, some of whom I met on the train as they were instantly recognisable with, compulsory, unfashionable, short haircuts. It was a very long, slow, train journey and we were greeted by transport (a lorry) at the station but the tone was set as it was only for our kit - we had to walk or, in my case run as I had short legs and could not keep up! I had been sent by my Apprentice Supervisor who I suspect was well aware that I had done no sport since leaving school and did not like long hair! Luckily neither my Supervisor or myself realised that I was still fairly fit as a result of riding ancient motorbikes, which often ceased to function, or ran out of petrol, forcing me back to a push bike whether it was a 10 or 120 mile journey.
My memory of the most important lasting benefit was rapidly learning the old army volunteering tricks, for instance to select whether you were to canoe, rock climb or pony ride the questions were "afraid of heights? water? or horses?". Claiming to be terrified of water ensured I was in canoe group - which was clearly the safest option! Regrettably we were eventually banned from canoeing as we broke too many kayaks when surfing on to the beach - they were wood and canvas and did not take to standing on end!

Only 2 members of our course failed to complete and remained in hospital (fractured ribs and collar bone respectively) - they all tried to ride ponies and I clearly remember one flying over a hedge above the school where we were hurling javelins - on our side the hedge was at least 10 foot as it was a steep slope and, as he lay groaning on the ground, an instructors head appeared over the hedge, presumably he was on a horse, and sympathetically shouted "get back on that horse lad"! Fortunately the guy was totally winded so could not make a suitable response but we gave him a chorus of the "get back on that horse lad"� when he staggered to his feet - which was not appreciated!

The instructors, especially the more senior, were a fairly eccentric bunch and, in hind sight, it is astonishing that the casualty rate was so low. As an instance of this, we arrived at the quay to board the cutters which were moored a couple of boat widths away (so as not to obstruct the quay?) at low tide so we were standing level with the mast heads. Volunteers were detailed to jump from the quay to mast to clamber in the cutters and throw a rope back to pull the boat in and enable all to board. No one mentioned that at low tide there was only a couple of feet of water so it would have been painful, to say the least, if the "volunteer"� missed the mast - as it was he only sustained a few more bruises. Another bright idea, from the guy in charge of the school, was "drown proofing"�. The theory behind this was that anyone, whether they could swim or not, would float (conveniently ignoring the slim males who could not) thus all were supposed to hang in the water and raise your head occasionally for a breath. Luckily I could swim but those who could not really suffered in the freezing water.

I guess the other event that remains with me and hopefully make me a more responsible instructor (I teach sailing) is the stupidity of the instructors ignoring the forecast of gales and local advice as we rowed and sailed to stay overnight on the sand bar (an island) outside Barmouth. The gale duly arrived, stranding us on the bar (island) and our overnight stop under the sails of the boats became two nights with food and water for only one. The benefit came when school ex RNLI lifeboat came to tow us back to get on schedule bringing food which was not distributed till we were underway to save time. With a strong swell only 2 of us on our cutter out of 13 were not sea sick (sea sick to the extent we had to restrain one guy with blood everywhere as he banged his head on a block, bleeding profusely but unaware of his injury in his misery). The benefit - I am, slightly, ashamed to say, was we polished off all the food between, eventually only 2 of us, us before we got back to Aberdovey!

I guess that Health and Safety has reduced the enjoyment now days but I certainly enjoyed my stay, it was significantly better than being at work and must have improved my confidence mixing with an eclectic bunch including Borstal attendees, Police Cadets, students, apprentices and assorted service personnel certain, by the end of the course, that we had yet to find our limits.