Lothar Scheidt
Back to alumni stories 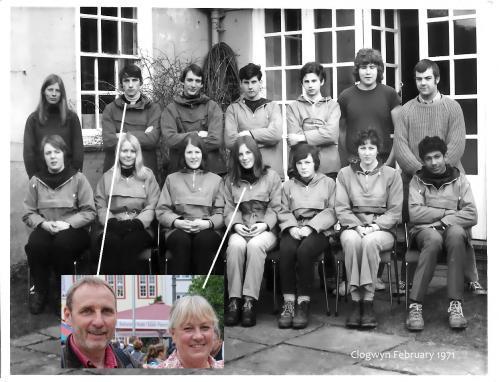 I was 16 then. And I didn’t know anything about Kurt Hahn, Outward Bound Schools, their philosophy and their educational efforts. I had heard some rumors about outdoor activities. What me and my other German classmates had in mind when crossing the Channel was our trip to Munich with school too just a year before– a lot of sightseeing, museums and - yes - a few occasionally steins of beer in “Hofbraeuhaus”. Sure this time it was England (with a short stopover in London). Wasn’t that the promised land for a teenager in the seventies – swinging London and homeland of all the great rock bands I had started to admire for their style and attitude a few years before?
So after a sunny spring weekend in London in February 1971 our group moved on from Easton Station heading to Tywyn. Cities and villages we passed along got smaller and smaller and more and more pastoral scenes appeared outside the compartment windows behind Shrewsbury. Even the trains got smaller and slower. In Tywyn we were transported to the Girl’s Outward Bound School Rhowniar riding on a lorry. A mixed course we were to attend. Mixed with respect to gender, nationality, cultural and social background, age. Conflicts seemed to be programmed.
A first small shock for us Germans was when we got assigned by threes or fours to different groups. I was one of the members of Clogwyn together with two other of my classmates, Uschi and Josef. The first few days I didn’t understand a word as I remember quite well. What were the warden, instructors and other English speaking people around me talking about? I really didn’t get more than a few glimpses of information at first. Asking a friend in German whether she or he could make sense of the instructions and advices we got was a little bit delicate while our teachers were close by and were strictly paying attention that none of us Germans might use our mother language for the next four weeks. Coping with all the different liverpudlian, cockney, welsh and scottish dialects from was true a challenge even after having had about six years of learning Oxford English (mostly reading and writing) in school then. Being in Rhowniar we learned common English for everyday use in a maybe hard but also straightforward and efficient way just by imitating syntax, semantics and idiomatic constructions we heard after we had been able to resolve our firstly felt embarrassment expressing ourselves in a foreign language. After a short while most of us Germans had soaked up enough of the idiom to communicate quite fairly. I can recall that I even started dreaming in English (maybe with a few German undertitles here and there).
Planning and managing duties and challenges together as teammates in house or in the fields, climbing cliffs and mountains, getting wet while canoeing, roping and hiking and orienteering, camping in rain and snow effective speaking surely was a key factor. If only due to the fact we had to rely on each other strongly in the wilderness of Wales. I remember quite well that all these fascinating outdoor activities worked out fine for me and I was really into it. Though I must confess I had not been quite similarly enthusiastic about the housekeeping and cleaning tasks at that time.
(Be sure my attitude to these duties changed quite a bit. If in doubt – ask my wife).
After finishing the course I needed some time to realize how important and fulfilling these few weeks had been for my further personal development and future opinions about living and working together in mixed teams.
But the best part of the story is yet to come: This course in 1971 was the setting when we met for the first time. Valerie, who was the youngest girl of all participants (she got “sweet little sixteen” during Final Scheme while hiking the Plinlimon hills), and me the youngest male attendee. Besides all the most important experiences, insights and remarkable character building influences which were delivered to me by the course itself the now already long lasting friendship between Val and me is by far the most precious gift.
Shortly after we had returned to Germany again, I received a letter from Val asking me if I could send her a few copies of the photos I had taken during different outdoor activities like climbing Cader Idris. Though I needed some time accomplishing her inquiry our connection never broke down since then. For more than 40 years now we’re still in contact - both with our own families, hers in Ely, Minnesota, mine in Bonn, Germany. Seldom we have met in the last decades due to the far spatial distance between our homes, but we’re still close in our spirits since O.B.
About every 5 – 7 years, Val, when visiting her parents who still live in England, takes a chance crossing the Channel and staying a few days with us here in Bonn. A few weeks ago one of these scarcely and thus exciting opportunities once came again. Though modern information technology helps to leverage staying in contact, meeting from face to face can’t be substituted by even the best electronic media.
The bond O.B. endowed between us is a strong one. And I’m sure it will steadily last on for the coming decades. O.B. gave us a unique chance which our parents hadn’t had when they were young due to very dark times, inhuman ideology and bad politics in Germany and hostile relationships between or countries. I’m sure Val and I made the very best out of it building up and maintaining a deep and lasting friendship between us and our families across all borders, cultural differences and nationalities.
Is there anything which could be a better offspring from an Outward Bound course than that?
(posted 12/11/2011)