Ken Nichols
Back to alumni stories 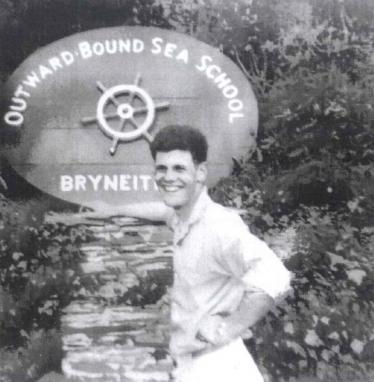 We were all awakened at 6.30 this morning and hurried down to the parade ground for PT, which was followed by the legendary cold shower. Needless to say, after that I felt wide-awake and ready for breakfast!

After breakfast we were told to change into our walking boots and muster for a morning’s workout on the army style assault course and monkey ropes. The twelve-foot wall was the first obstacle we had to encounter. The trick was how to get all 13 of us to scale the wall. Our instructor told us to “get on with it” so we had our first try as a team. After 9 minutes however, 12 of us were over, leaving the 13th man still on the other side. As a team we had failed to get everyone over and it was obvious we needed to know the secret of how teamwork could achieve our goal. After a little bit of instruction from our watch instructor (Sea Daddy), the team managed to get everyone over in just 4 minutes dead.

The monkey ropes were next on the agenda and I can honestly say after going over the top (15ft) several times my lungs felt as if there were going to explode and my arms and legs felt as if they were dropping off.

It was all pretty scary stuff on the monkey ropes as there was no safety equipment to stop you falling off and having a serious accident. It was a real eye opener and sorted out the men from the boys and something on that Sunday morning I thought a part of Outward Bound that I’d never get used to. Needless to say it was all just a little bit of so-called “toughening you up” prior to the expeditions that were to follow.

After lunch our instructor decided to take Rodney watch down to the wharf. The march from the school to the pier in Aberdovey was followed by a lecture on how to tie every conceivable knot known in seamanship.

Our watch then went on to see what was to become our next home, the gaff rigged motorised 7 ton fishing boat called the Golden Valley. We would be spending the next 3 days aboard her on our first 3-day expedition at sea.

The march back to the school for tea was followed by free time before mustering up to sign on for sea duty. At this point our instructor decided that John, who was a junior leader in the army, would make a good captain for the watch. The position of vice captain, he bestowed me the honour.

Dinner at 8pm was followed by a brief lecture on first aid. Then back at Drake hut the comedians (the six police cadets) kept the rest of us awake till 11pm talking about how to commit the perfect crime!

One of the most enjoyable day’s on the course so far. It all started with me being instructed to get a couple of lads from the watch to collect our packed lunches from the kitchen. We then proceeded down to the beach marching along to the song that Rodney watch had made their own “Do you ever get one of those days” in gorgeous sunshine.

It was a great morning’s sailing back and forth across the estuary taking it in turns on the tiller and manning the jib sheet. We soon found out the hard way and lessons learned during the morning gave us more and more confidence in ourselves so much so that an incident just before lunch made us a little bit more aware of the dangers of sailing and the sea.

All the boat crews had been told to rendezvous at the pier at lunchtime so we could all eat our packed lunches together and share the knowledge gained during the morning.

Brimming over with confidence we decided to let the other crews tie up for lunch first so we could make a big impressive sweep across the estuary and come into dock with the wharf on the left hand side. It certainly must have looked impressive as our instructor waved constantly from the jetty as if he was trying to communicate something to us.

Van Peborough was at the helm and he like the rest of us had no idea that we were going in too fast. Our instructor waving and jumping up and down was later pointed out to be his indication that we should have taken down the mainsail and come into port carefully just using the jib sail.

The gods must have been with us as I pulled down the mainsail seconds before coming alongside the wharf much to the delight of the other crews as they clapped and cheered not realising how close we had become to danger.

The afternoon was spent sailing back up river running with the wind. This was made more interesting as Davis at the helm of one of the other Rovers that had our instructor on board managed to capsize the boat giving everyone on board a good soaking.

As soon as we saw them in the water we made straight for them hoping to be of assistance. I was at the helm at that time and as we came closer we were told by Sea Daddy in no uncertain terms to “keep away you fools” but we did manage to rescue one of the guys’ wristwatch as he swam towards us with one arm permanently out of the water. Obviously with hindsight Sea Daddy could see the prospect of having two boats capsized at the same time with the likelihood that the other crew might foolishly try and climb in to our boat.

It takes an experience crew to turn a capsized Rover back upright and unfortunately Sea Daddy was on his own. There was little we could do and sailed back to our mooring, tied up the boat and ran along the beach to see if we could be of assistance as the guys came ashore. They were all pretty exhausted after their marathon swim and thankfully all of the crew were OK.

Our police cadets plus John from the Army had decided to leave Rodney watch on Wednesday after the pass out ceremony. The remaining six spent the night as usual in Drake hut. It was so different without them, and they were definitely missed.

The cold shower was not on the agenda today but the six of us decided to go down to the shower room just to see if a hot shower really was available. After 26 days of freezing cold water every morning, the hot shower was a sheer delight and added to a feeling of personal achievement and pride that Outward Bound had somehow given me. I cannot describe it, but it felt as though I had done my duty and could commit to any challenge that life might bring.

The kitchen staff waited on tables for those of us that had remained overnight and most of the school instructors sat down for breakfast with us. Sitting down to breakfast with our instructors also gave a feeling that somehow we had joined their club and were now representatives of an elite group of fortunate young people that had been given an opportunity through adventure to seek a different view of life.

Saying all our goodbyes continued after breakfast. The shaking of hands and the promise to keep in touch were all heartfelt gestures of the day and a reunion sometime in the future was something we all agreed would be something to look forward too.

Outward Bound had been an adventure. It was tough, exciting, exhausting, hilarious, frightening, and at times extremely dangerous. There were a few moments when I thought I wasn’t going to make it but I survived...

I’m sure my fitness and physique had made me a prime target for leadership. After two weeks the guys in my group voted me their watch Captain. Perhaps it was the survival of the team under my leadership that eventually gave me honours at the passing out ceremony on day twenty-six. It had been all hard work but I wanted to make a good impression and to take a good report home with me.