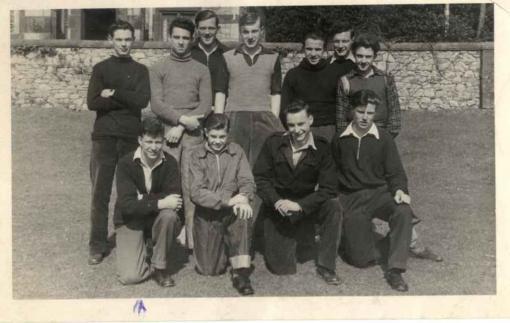 Mr Broadfield kindly sent us his Outward Bound course log book, of which below are extracts of his entries, which we have posted to the website with his permission

Sunday April 5th 1953
We had a scheme to get used to the grounds of the centre. We started off at a certain point where we were given a clue which led us to another and so on until we covered a fair portion of the grounds. After a lecture we had a short service - altogether the first day seemed like a month!

Monday 6th April
The most important thing that happened today was the quiet walk and talk. It was one of the most gruelling yet fascinating days of my life. When you get on top of a mountain you forget about everything except what you can see below and believe me, when I say it was wonderful, I doubt if words would describe it, anyhow it was breathtaking in more than one sense of the word.

Tuesday 7th April
In the afternoon our Patrol went on a mountain rescue scheme in which I took part in guiding a stretcher with one of the patrol down a crag, and boy was it exciting, especially going down the sheer part of the crag! In the evening we had a lecture on mountain rescue and after that we had practise on putting the shot - which I put it 4ft further than last time, so I am in the patrol competition.

Saturday 18th April
We started the day today with "The Death Slide"� which is crossing the lake by means of sitting in a rope cradle attached to a high tree, and sliding down by means of a pulley. Later on in the morning our patrol had the ropes competition and everyone gained full marks. In the afternoon we had a big surprise - a cross country run. I finished 4th which was an even bigger surprise!

Monday 20th April
What a day! We started off with brilliant sunshine which lasted the whole 4 days (I'm writing on 22nd) and what a job we had getting to our destination which was Sty Head Tarn about 12 miles away. On the way we passed Burnmoor Tarn then on to the Waskdale Head where we stopped off at the hotel for a cool drink and did we need it, especially one of the lads, Ted, who collapsed just after passing Burnmoor Tarn.

Monday 27th April
Today was the most gruelling day of the course. We carried out a scheme entitled "Suspense"�. The warden was a suspect of a smuggling gang and we had to get information to enable to round the gang up. This meant the patrol splitting up again. I and another person had to go to Gosforth, about 6 miles away, and after obtaining our information we were to make our way to Buttermere where we would join the rest of the patrol. All in all we walked 25 miles. After bedding down in a barn we eventually dropped off but were awoken at 3 in the morning by one of the lads who fell about 15ft from the top of the barn, bringing down practically all of the hay. We didn't realise how much had come down until we got a torch and we started to get them out of the hay - one was nearly a goner but we got to him just in time.

Wednesday 29th April
Our final dip in the tarn today and I enjoyed it even though I didn't feel like it at the time. We have our last inspection this morning and then final kit inspection this afternoon. The final competition result - our patrol won! Which takes real effort and the prize was a book on adventure which is well deserved. In the evening we had dinner followed by a concert which was a really good show. We left for home at 7am on Thursday 30th April.......