John Grice
Back to alumni stories 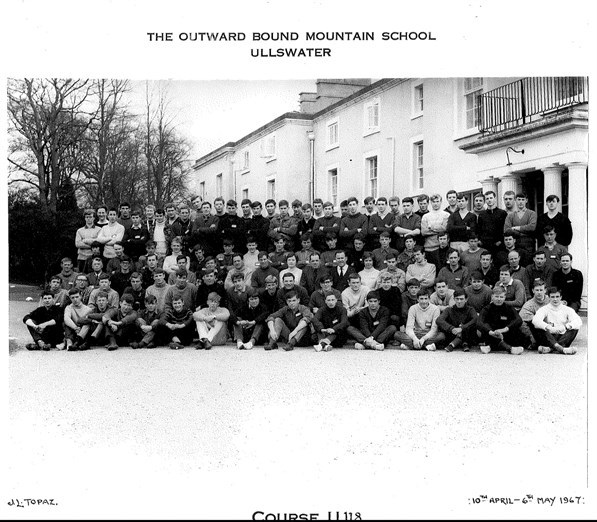 Outward Bound Generations Course U118 – 10th April to 6th May 1967. I am now 67 years of age, and was born in Merseyside. I commenced work aged 15 years as an apprentice coach builder, for what was at the time the Ribble Motor Company. In 1967, I joined Lancashire Police as a cadet, awaiting employment as a police officer. Lancashire Police sponsored my attendance as a student on course U118 at Ullswater Outward Bound School, commencing on the 10th April to 6th May 1967.

I have always been on the large and heavy side at the time being 6 feet 2 inches tall and 13 stone 9 inches. I am aware that a fondness for the occasional pint of beer contributed to my weight. Fortunately, at the time I had never smoked. I recall a certain amount of trepidation upon the train journey to Ullswater. I had never been to the Lake District before and was a little in awe of the size of the fells I would later be walking upon, (up)!

I have vague recollections of being ‘paraded on’ outside the front of the school, where we were assigned ‘Patrols’ and dormitories. At this time we were introduced to our course instructor Merrick Thomas Sorrell, known as Mick Sorrell. He invited to ’briskly’ make our way to our dormitory, where bed were allocated, (I think I got a top bunk) and our bags were stored. Mick Sorrell then informed us it was of vital importance to understand necessary health and safety regulations (of 1967), namely the fire drill. He took a knotted rope, using a carabiner, hooked it into a ring beside a window next to my bunk and then ‘instructed’ us all to ‘evacuate’ the building, via the rope. Never having been too good with ropes at school, and my trepidation increasing, I made my ‘escape’ via the rope, (without mishap) outside the school once again. I recall being aware that all students were required to sign pledges, not to smoke and furthermore, not to drink alcohol. The former was not a problem. Given that I had been drinking since age 16 years, I was unsure what the effect of abstinence may be. It was at the juncture, that I became aware of a former school colleague (on the course list, under Shackleton Patrol) David R Hunt. He also was a rather large young man. If memory serves me correctly, David did have a problem in that I recall him to be a smoker.

I believe we enjoyed an evening meal, familiarised ourselves with the school and grounds, later retiring to our dormitories, then having time to introduce ourselves a members of Scott Patrol. A great character in our dorm I believe was named Geoff Dennis (Geoffrey Colin Dennis, Course photograph, 4th row from the front, 11th from the left ). Geoff was a very fit wiry young man, who later would prove to be the star player in the Scott Patrol volleyball team which beat all other patrols and instructors during a final week tournament. I guess some students found introduction to the school a little daunting resulting in three students going ‘awol’ (absent without leave) the same night. Thankfully they later returned to the school to complete the course.

We were awakened at 6.00am the following morning by Mick Sorrell firmly exhorting us the ‘get out of our beds; get into shorts and plimsolls, because we were going for a run. Little did we know our run took us over a hill, down to a jetty and ‘INTO’ Lake Ullswater. We were required to be fully submerged and then to get out and run back to the school, (this time somewhat faster), to dry off and get warm once again. Lake Ullswater could not be described as ‘warm’ during April May 1967. In fact it was ‘bloody freezing’! It literally took the breath out of you and further, if you did not fully submerge, you were required to do it again. Following showers, I recall taking breakfast in the communal dining room and (as the course evolved) students consuming vast quantities of bread to gain sufficient energy for the demands of the course.

Memory reminds me that I was looking forward to canoeing during the course, thinking it may be somewhat easier than hiking up the fells. The warden’s course report reminds me as a consequence of a fish disease in the lake, this part of the course was cancelled. Back to hiking up the fells! During one patrol outing we crossed the summit of Helvellyn. Breath-taking views from the top, also short of breath. We were introduced to the outdoor skill known as bivouacking, (travelling light), discovering a suitable place to cover ourselves with sheet shelter for the night. Great experience in self-reliance, although once again a very cold night. In addition, we made patrols across the fells, overnighting in tents and cooking our own food. Once again I am reminded of really enjoying ‘my own cooking’! Mick Sorrell introduced the patrol to climbing and abseiling. At the time I was wearing a black roll neck sweater under a thick woollen sweater. The black roll neck sweater must have had nylon within the material which whilst abseiling down burned through across the shoulder under the rope.

Between 10th April and the 6th of May, course U118 endured everything the weather could deliver, from blizzard through complete ‘whiteout’ visibility, to wonderful sunshine providing some with a tan. Personally, I had arrived very unfit, consumed vast amounts of food and by the final week had lost 13 pounds in weight. I was physically much fitter and felt the benefits. Some weeks later completed the ‘Three Peaks’, Ingleborough, Whernside and Pen y gent in about 8 or 9 hours. I know Course U118 had prepared me for the challenge. Merrick Thomas Sorrell. I have never forgotten Mick Sorrell. He ensured I completed the course, was of great assistance throughout and would not allow any of the members of our patrol to fail. He instilled in me self-confidence and to some extent the leadership skills required during my later career as a police officer. At the time I was unaware that Mick Sorrell was a former police officer with Stockport Borough Police prior to its amalgamation with Greater Manchester Police. Recently I ‘googled’ Mick Sorrell and was surprised to discover that Mick ‘Slim’ Sorrell was recorded as climbing with very well-known climbers including Joe Brown and Don Willans. Mick was born in either 1928 or 1929. Sadly he died in 1976.

http://footlesscrow.blogspot.co.uk/2015/08/slim-sorrell-northern-grit.html Mick had a great sense of fun. During one of our ‘patrols’ on an orienteering exercise we were required to collect evidence of our having visited various map reference points on the fells. At one location in mist fog and cold, whilst searching for the necessary ‘token’, we heard shouting and laughing from above, and were surprise to see Mick running down an acute slope from a hill toward us. Having checked in with us he then ran off in another direction. A very fit man! He was a vibrant, full of life character. I have very good memories of him. To conclude, I will be ever grateful for the experiences I gained during those weeks. I am indebted to the Outward Bound Organisation for providing me with a magnificent four weeks, with all members of Ullswater Course U118. John P. Grice.