John Flint
Back to alumni stories 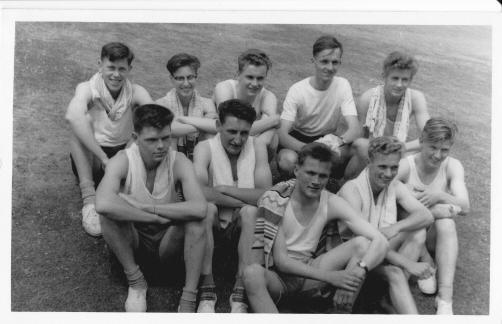 The decision to write My Story came about during a brief visit to The Outward Bound Trust in Eskdale a couple of weeks ago during a short holiday in the Lakes.

The course I took part in was a four week leadership course held in 1957. To my shame this was the first time I had returned to the school in 57 years, in fact I was not sure it still existed!

My wife and I received a very warm welcome and an invitation to tour the grounds - which even after 57 years brought back a considerable number of memories. At the end of our visit and a look at through the year books, I agreed to "tell my story".

The following story rather than a day to day account of my cherished log book I have chosen to provide a single story based on the events that occurred during our final three day scheme.

The story starts on the second day of our final three day scheme which took us over Langdale Fell. I cannot remember much of the first day except that the weather was terrible being bitterly cold with persistent driving rain. The weather on the second day was no better although we were in reasonable spirits until we realised that our navigator had taken us down the wrong ridge. This came to light after about half an hour of slogging through the rain when he admitted he had made a mistake. After a lot of debate and a round of Kendal Mint cake we agreed we had two options either retrace our steps to the point where we turned onto the ridge or run down to the valley bottom and up the other side (we were pretty fit after all!). In view of the fact that it was late afternoon we opted for the latter. I reckon it was a good thousand feet down and then up onto the right ridge.

Once back on track we started looking for a possible bivouac site. Finally we found a good stone wall against which half a dozen sheep were sheltering from the rain and wind. It goes without saying that since we were all soaked to the skin and they had thick woolly coats to keep themselves dry it wasn’t difficult to decide that our need was greater than theirs. They were promptly chased away to find another bit of wall. We then pitched our bivouac sheets against the wall and managed, with a bit of effort, to get the stoves to light. We heated some cans of soup and with a bit of bread and a lump cheese each we had a reasonable meal.

The highlight of the meal came when the quartermaster produced a large bar of fruit and nut which was a nice change from Kendal Mint cake. After our welcome dinner everyone elected to retire to bed. This meant taking off all our wet clothes, drying ourselves as best we could, and putting on a set of dry clothes stored in our rucksacks. It’s fair to say that nobody got much sleep and the morning took forever to arrive. As we finally emerged from our sleeping bags we found that the rain had stopped and the wind had dropped but we now had a thick mist to contend with. The mist was so thick you could hardly see your hand in front of your face. The first task after emerging was to take off our dry clothes and put the wet ones back on. After a meagre breakfast we drew lots to select the day’s navigator. That done we had to decide where we were and plan our route to the next check point which was the mountain rescue post at the head of the Langdale valley. Problem was nobody, least of all the navigator, which happened to be me, had a clear idea of where we were. We finally agreed on our approximate location and selected a compass bearing. We then picked up our rucksacks and started walking through the soaking wet grass and bracken using our recently acquired knowledge for navigating in thick mist. There was absolutely nothing to see apart from the occasional startled sheep that leapt out of the mist. After half an hour or so we came across a rough track that was wide enough for single file and decided to follow it since it was roughly along the compass bearing. It was clearly a sheep path but we reckoned since they are pretty good at navigating the mountains it was good enough for us. After a while the track started to head down. The further we went the steeper the track got. Suddenly the Patrol Leader called a halt and we all gazed at the almost magical sight in front of us. The mist seemed to be glowing as if it was on fire. We started off again and the golden glow got brighter and brighter until, quite suddenly, the leader shouted that he had walked below the mist and in front of him was the whole of the Langdale valley lit up by the sun. It fair to say that our spirits soared and the trials of the previous two days were forgotten. We then carried on down the track heading towards the mountain rescue post at the head of the valley. Suddenly there was a shout from the one of the lads at the back of the patrol. We all stopped and turned around and gazed at the incredible sight behind us. We had actually walked down a gully between Harrison Stickle and Pike of Stickle two of the rock climbing crags constituting the Langdale Pikes, if we had been say a quarter of a mile either side of the gully we would have been in real trouble.

We stopped by the mountain rescue post for a well earned break. The weather had been transformed into a typical hot July day, rather typical of the Lakeland weather we had come to know during the previous three weeks. It was then time to head back to the school. Our route took us up and over the fell above Bleadale Tarn and down onto Wrynose Pass. It was during this part of the trek that I learnt a very valuable lesson when walking in the mountains with a heavy rucksack on your back.

We were heading down a steep rocky track when I slipped and pitched head first down the track. The result was that my rucksack reared up my back and finished up pinning my head to the ground and I simply couldn't move. It took two of the lads to get the rucksack off me. Fortunately apart from a few minor scratches to my face I was not injured. The lesson being that if you are carrying a heavy rucksack make sure the waist strap is securely fastened.
I cannot remember much of the return to school, but as we trudged the twelve miles up and down the Wrynose and Hardnott passes all I could think about was the waiting showers and the fact that we were not duty patrol and we would not be on washing up duty after dinner.

A final note:
It should be remembered that in 1957 things were very different to what they are today. Bivouac sheets instead of tents, paraffin primus stoves instead of butane stoves, proofed cotton anoraks that were at best shower proof instead of light weight breathable water proof jackets and of course no GPS or mobile phones!

The four weeks spent at Eskdale were a wonderful experience that taught me a lot about how to manage the rest of my life. In particular, personal discipline, how to co-operate, compromise and work with others. How to listen critically to others points of view and be prepared to acknowledge when I am wrong. All in all a priceless experience.