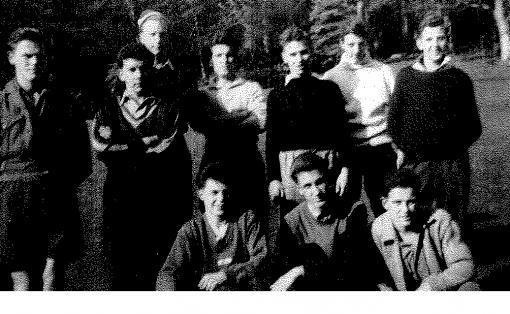 I am a former Outward Bound student who at the age of 18 was selected by my employer Total Broadhurst Lee Co Ltd of Manchester to attend the school at Eskdale during the month of November 1955.

What a month that was, characterised by cold, sleet, snow, ice and driving rain. Nevertheless I can confirm that the benefits of the Outward Bound experience have endured and fulfilled me ever since.

I am now 72 years old and I have NEVER ceased to describe to all that would listen, how that 1 month was the MOST memorable, impactful, intense, demanding and rewarding month of my entire life. I still believe that to be true as I write this today!

I have been a resident of Canada since 1984 and I am happy to see that the Outward Bound tradition lives on here.

The 4 weeks of November 1955 contained some of the most physically and mentally challenging experiences that I have ever had. The pride and joy that accompanied a successful conclusion was deeply satisfying to put it mildly. Interestingly, a few months later in February 1956 I was conscripted into the British Army for 2 years of National Service. I did 3 months of what was then called Military Training at Catterick, North Yorkshire followed by 21 months in Germany. I had been forewarned to expect a difficult time at Catterick. Compared to Eskdale just 3 months earlier, the Catterick experience was a so-called "cakewalk"�!

My experiences at the Outward Bound School were many and varied. Ranging from breaking the ice on the tarn every morning at 6.30am and jumping in, followed by gymnastics and breakfast. They also included rock climbing, canoeing and several 4 or 5 day trips over the mountains "lugging"� massively heavy rucksacks in bad weather, with and without an instructor present.

On one particular expedition after wading through river and rain swept mountains, it was time to pitch tents and dry out. That night (like a good old city boy) I removed my soaking wet boots in an attempt to dry them out. The next morning I woke up to find them frozen solid and unusable! I promptly lit a fire to expedite the thawing process. Unfortunately later that morning whilst hiking up and down mountains, the soles detached themselves from the uppers and I was left with no alternative but to continue the expedition in thin gym shoes, that was some ordeal!

I still have my badge of honour awarded to me by the school almost 55 years ago. It is in its original pristine condition. On the front are colours of silver, blue and red on a compass design which I think reflects the fact that I was given some extra leadership responsibilities for our small group of students on our mountain expeditions without instructors. On the back, the Outward Bound motto "TO SERVE, TO STRIVE AND NOT TO YIELD"� is engraved.

I can say without equivocation that the Outward Bound experience provided me with leadership qualities and unknown reserves of endurance that prior to the experience I would have not been aware of. These qualities have accompanied me and stood me in good stead to this day. I worked successfully for more than 40 years for some of the world's largest textile companies, rising to become and Managing Director in England before transferring to Canada where I was appointed President and Chief Executive of a public traded company in the same industry. I retired in 1993 and continue to live in Canada.

The month of November 1955 in Eskdale proved to be the most valuable experience that anybody could wish for and I was truly privileged to be given the opportunity by my employer at the time. My only regret is that not every person in the country could share it. I genuinely believe that the country as a whole would be better for it today if it could have been so.

May the Outward Bound experience continue to reach an ever wider audience.