John Dogherty
Back to alumni stories 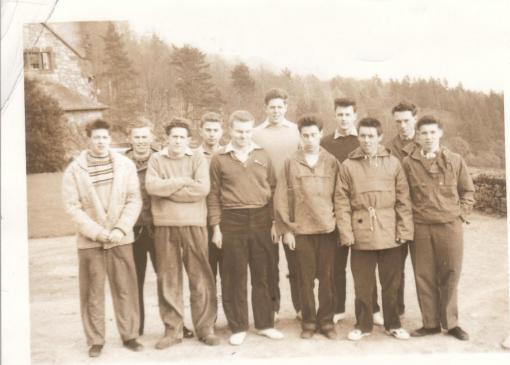 
I cannot now remember exactly what first brought Outward Bound to my attention, but seeing the film 'The Blue Peter' in the 1950's persuaded me that this was something I had to do. A junior (very) Civil Servant, straight out of school, and trying both for promotion exams and for a shot at University, the sight of Tony Newley and a complete ragbag of types coming to terms with themselves and the outdoors convinced me to have ago.
The Civil Service was very accommodating in allowing me to take all my annual leave (two whole weeks ) at the same time, and graciously allocated me one week's sabbatical, provided I took the remaining week as unpaid leave. Looking back, perhaps I was not so badly done to as I thought at the time; they were certainly very interested in my progress. Still, with basic kit acquired and a pat on the head from Mum, off I went, one of the oldest to take the course.

I still have my diary and photos of the time, bringing back memories of hard physical work, fantastic trips out into the mountains and the curious effect on such an eclectic mix of types of learning to cope together with hardship, sometimes genuine danger and just plain team work on everyday tasks such as washing up for over 100 boys and staff. There have now appeared on the website many accounts of the experiences of attendees over the years, showing how the character of the course(s) has changed since the 1940's but they all give off the same air of wonder at the changes wrought in us.

First there was the introduction to our Patrol Instructor, Tony Greenbanks: (Hi, Tony, if you're reading this: May the road rise to meet you and the wind be always at your back!) Following this we met the Patrol members: a mixture just like that in 'The Blue Peter'. Me, (a civil servant and ex grammar school lad), the Old Harrovian (Duncan) preparing for University, Sturgess (Sturge) a local lad with some experience of the area, two police cadets, two apprentice lads (not too pleased to have been 'volunteered') an educationally limited boy with a great heart (Keith?) as well as two others from equally mixed backgrounds.

We settled in and were inducted (horrid word!) taking a very basic medical test. This seemed to consist of being weighed, having our blood pressure and heart rate taken, then asked to run up and down the spiral staircase in the tower a couple of times, then having blood pressure and heart rate taken again. If we survived that, then I suppose we were deemed fit for what was to follow! A couple of days settling in, with lectures on safety and first aid, and briefings on the ethos of the School, the Badge system (colours for different levels of achievements in three key categories) which would be applied to the Badge at the end. Discontinued soon after our course partly as a result of questions put to us at the end of course exams!

We were introduced in short order to one of the key features of the School: the Whimsy. Rise at 6.40, run round the Tarn then stand under the spout whilst the remainder of the Patrol chanted the time. Then it is your turn! The weaklings of today have no such pleasure!
Then off on our first expedition. 5 miles with full packs up the road to Brotherilkeld, then another three up the valley of the upper Esk to a sheepfold at Throstlegarth. Led by our cheery instructor Tony Greenbank, we camped in sheer luxury on stones, wrapped in our bivvy sheets, dining on powdered potato, dried onions, chopped luncheon meat and boiled water. Lovely.

Next day, full of porridge, and bones creaking, we climbed further into the wild hinterland of Upper Eskdale, pitching up again under the Scafell range. Then followed a quite remarkable essay up the side of the fell. Camspout waterfall was frozen solid, but up beside it we climbed, ice axes at the ready. We stopped for lunch in the low cloud at Foxes Tarn, a lovely little circle of frozen water with a perfect mushroom of snow and ice in the middle. Ice axe practice consisted of allowing ourselves to slide backwards down a snow filled gully until told to stop ourselves using the axe. I now know that this gully ends in a near vertical 400 metre drop. Do not try this at home!

Then a climb up onto Scafell top, emerging out of the cloud into a wonderland of pink candy floss through which poked the tops of a very few of the highest hills. No words can convey the impression that made on lads who had never seen so much as a colour travelogue of mountain scenery. The return was via the Scafell ridge to Esk Hause and back down to camp, a good hike in itself, but hardly ranking in memory beside that view.

I returned, somewhat involuntarily, to this valley (Green Hollow, actually) 50 years later, due to a navigational error. It is still as wild and beautiful, and still a bad place to get stuck in overnight!

Other expeditions followed, some of them solo in which we had to locate an OS point and describe what we found there, camping out overnight; some of them full-scale Patrol adventures. Possibly the most memorable of these was our rock climbing trip. In preparation for this we had lessons back at the school. One of the most important was to acquire trust in the top man (he who went first, then tied himself on and guided the next man up) This consisted of climbing halfway up a 30 foot steeply sloping rock face, then being told to jump...... This takes some doing, but is absolutely necessary, as it also teaches you the value of 'belaying ' properly when it is your turn to be top man.

One more lesson to remember was the abseil. No slings, carabiners, hoists, winches or sissy stuff like that: just the rope, the 'Classic' style, like the commandoes! Then off the top of the School tower onto the rear terrace. Again, don't try this at home! But my, what fun!

The climax of the course was the Final Scheme, in which we were sent out in groups of four (mine was three) to walk as far as we could, and climb as high as we could in three days.
The weather now chose to close down from pleasant and sunny to threatening and, as it turned out, full blizzard conditions. I have no pictures of this, as the objectives to be reached required full effort all the time and I left my camera behind. All I can fully remember is that, on climbing Great Gable in 20 minutes from Stye Head Pass in nearly zero visibility, and a horizontal snowstorm, we came across a couple sheltering under the memorial plaque. No compass, map, whistle, spare food or clothing, they were casually dressed for a day out wandering round Grasmere. With no idea of how to get down and with dusk falling, the temperature already below zero and falling fast and a full scale winter storm blowing, they were in real trouble. Our target was to camp in Ennerdale at the foot of Black Sail Pass. Those of you who know 'Gable' will know that the way off here is narrow and hard to find in mist, and there is no 'off-piste' route; i.e. wander off the path and you have crags or near vertical scree to contend with. Now was the time for our training to come in. We took bearings, adjusted for magnetic variation, double checked our actual position and set off, hitting the path smack on. A lesson never forgotten, but ignored at one's peril as I found out 50 years later! Our sense of achievement at delivering our 'charges' safely to the Black Sail hut can only be imagined. My final memory of that expedition is climbing up to Pillar and performing a waltz in full gear and with a full pack in crisp new snow under a beautiful blue sky. Oh, sweet bird of youth! Oh, what an idiot!

Possibly the most formative experience of my young life to date, it is one that has never really faded. What I learnt there has stood me in good stead many times and given me an enduring love of the fells which I have been able to pass on to my family. My son went to Eskdale in his turn 30 years afterwards, distinguishing himself by helping to save the life of one of his patrol who came down with heat prostration. My daughter, although she never went, is now an accomplished walker with all the skills of leadership and mountain craft she will need.

I like to think that the lessons I learned at the School are now passing on to the next generation: my grandsons are showing interest in walking and climbing, and may soon be on the fells. Far more important, though, are the less tangible skills in managing life's little joys and problems.

Rudyard Kipling had it right, as always, in his poem 'If',
'If you can meet with Triumph and Disaster
And treat those two impostors just the same'

And so Ignatius of Loyola:
'To give and not to count the cost;'

the Motto:
'To serve, to strive, and not to yield'

And finally, Kipling again:
'Yours is the Earth and everything that's in it,
And - which is more - you'll be a Man, my son!'