John Barlow
Back to alumni stories 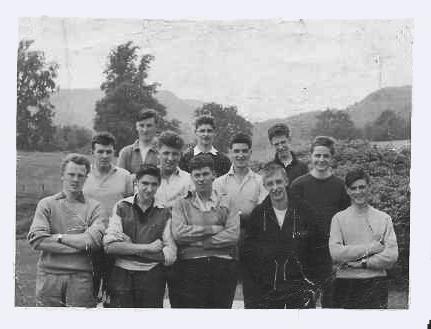 The month long course at outward bound Ullswater was and still is the most memorable time of my life. Our Warden was Squadron Leader Davies and our instructor was Mike Tebbut. The whole time on the course was wonderful and affected me for the rest of my life. Our motto to serve, to strive and not to yield is still my guideline for life.
I have never been an athletic person, being overweight all my life from birth, not interested in football or cricket or other team games.The four most memorable things that happend to me (apart from being introduced to the Lake District) were 1, The obstacle course. However hard I tried I could not get over that wall. On the last day it was obvious that not only me, but all the patrol would be marked down if I failed. The patrol and I together with the encouragement of Mike Tebbut eventually got me over the wall, not once but several times, this was of great benefit to me and the whole patrol - together we won. 2, The fell race, 5mile run over Gowbarrow Park. I couldn't run for a bus along the flat let alone run 5 miles over mountains. It was an enourmous achievement and gave me great joyn to realise I had come 94th out of 96 unbelievable, I also did much better than expected in the 100 meters. 3rd was more spiritual. We were well into the secondf day of the three day expedition when It came to me in a flash the whole meaning and purpose of it all. It gave me the inspiration and resources I needed to carry on and finish the course to the best of my ability. 4th on the 'tod' sheme where we were on our own (but within earshot of Mike and each other), we were to make our own way, build our own shelter, fend entirely for ourselves with limited rations for 24hrs. We were not to comunicate with anyone at all. Half way through the night my friend came to me in great pain. He had severe stomach pains. I made him as comfortable as I could and went in search of the Instructor. We had to get him back to the school acroos the lake and a few miles up it. Mike looked after my friend and tried unsuccessfully to start the outboard engine on the boat. The result was me rowing all three of us to the school were he was sent to hospital with suspected appendicitus (in the end it was powdered potato which he had not prepared properly). I then had to row back down and over the lake, go back to my makeshift shelter and carry on with my 24hr tod scheme.
The comradeship and mutual support we all gave each other was astounding. I have now lost touch with all of them, but will never forget them. I recently with the help of the Outward Bound Trust but without success tried to get back in touch with Mike Tebbut. We thought we had found him but it never happend. My Freind and I got in touch and met Mike a few years after the course when he was at Moray Firth Sea School. We were in the Rover Scouts and Mike agreed to mark and comment on the log and maps we had prepared for our Rover Scout Rambler Badge. We went up to Moray Firth to deliver them and went on board the Prtince Louis and also the powered Whaling Cutter used as a life boat on which we were involved in making a film for publicity. I believe the producers namd was Bill Ackerman. We P_assed our badges with flying colours. At 70 yrs old I stlii remember my wonderful month at outward bound. It was and still is the most memorable part of my life. I cannot thank enough Mike Tebbut, Squadron Leader Davies and their wives,all the instructors and my colleagues on UB40, The outward bound trust and my company Sterling Metals Ltd for sending me. A wonderful. exilerating and character building experience not to be forgotten or bettered. A few years later my younger brother Christopher went to Aberdovey.his experience was just as good as mine.Thank you all. photo is Shacklton Patrol UB40 John Barlow