Jo Gayton
Back to alumni stories 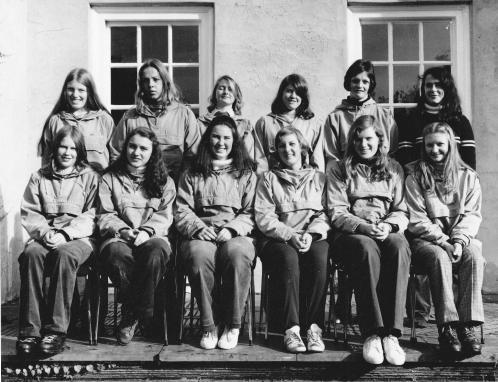 Memories of an Outward Bound Course

In 1973 I was a Cadet in Surrey Police Force, who sent me on a course at Rhowniar. On my return I wrote a description of the course for the Surrey Police magazine, as follows:

When I reached Wales for my Outward Bound Course at Rhowniar, I was dumped on Aberdovey station with my suitcase and a large crowd of other girls, and then piled into a converted cattle truck, which belted round the Welsh lanes to the school, set in a scenic valley between the mountains and the sea.

The group in which I was put was broken in gently the first night by having the first washing up duty, entailing washing never ending piles of cups, saucers, plates, and cutlery. Our first activity was a ropes course, which was not particularly high, and looked quite easy, but most of us managed to end up with our heads, or limbs stuck through bits of rope or swinging tyres, or in my case, quaking with fright and holding on for grim death all of twelve feet off of the ground.

Our first expedition consisted of one night of camping, and a day of walking, which is quite killing unless you are used to that type of thing. The scenery was beautiful, but it was rather hard to appreciate it at the time, when bent in two under a thirty-five pound rucksack and staggering up a seemingly vertical hill. The best part of the expeditions was the cooking and eating, provided one had a primus that worked and all the paraffin hadn't leaked into one's spare clothing as mine did.

We also had canoeing on the River Dovey which involved capsizing and whizzing down some rapids which was very enjoyable, and other activities such as drama, effective speaking, orienteering, and a field study of the local area.

On our second expedition we climbed Cader Idris which is about three thousand feet high, and was covered in thick mists from two thirds of the way up, and on our final scheme, we had to plot a course and follow it in a set area. We ended up trailing through miles of bog in pouring rain, crashing through pine plantations and being chased by fierce looking cows.

We also had rock climbing which was a bit hair-raising at times, and potholing down a dark, wet slate mine.

About fifty percent of the other girls on the course were cadets from various forces while others were from schools, or sponsored by firms. There were also seventeen German girls, who thought they had come to an English finishing school, not to sleep in damp tents, and eat out of baked bean tins.

Altogether I found the course very enjoyable and quite funny at times, and I suppose one can even say it was beneficial, although most of us were nervous wrecks by the end of it."


Thirty-eight years later, the above impressions still largely hold true. Memories of the course have stayed with me forever - the mysticism of the Welsh mountains and countryside in the area, the quiet wood-panelled rooms of Rhowniar Outward Bound School and the dormitories with metal bunks and lots of laughter, fun and discussion on the day's activities.

We were divided into four groups - I was in Carnedd and our group tutor was Vera, who was gently encouraging during the more challenging activities. A photo of the group is above - in the back row, I am third left and Vera is on the right.

As well as the major activities such as rock-climbing, abseiling, hiking expeditions and canoeing, I remember small things such as washing-up duties where we stood in a line in the large kitchen, tossing the clean plates down the line to the person at the cupboard, with all of us singing Simon & Garfunkel hits.

Similarly, we abseiled into blackness, punctuated with glimmers of candlelight, within a slate mine - at the end of the abseil we plunged into a cold underground lake. Those who had completed the abseil sang songs from the "That'll be the Day"� LP as the others came down.

My Outward Bound course was filled with music - "Wild Rover"�, "Ten Green Bottles"� and other folk songs whilst in the lorry en route to expeditions. We sang the Beach Boys' "Sloop John B"� when feeling homesick and used music from "Lord of the Rings"� by a Swedish musician called Bo Hansson and the American singer Melanie's version of "Ruby Tuesday"� during movement and dance, which I greatly enjoyed. We did actually sleep one night in a cottage with a bed for 16 people - the whole of Carnedd group fitted in quite nicely and inevitably we sang "Ten in a Bed"�.

Our course was a month long from late October to well on into November - I remember leaving my boots outside the tent on an expedition and in the morning finding my laces had turned into icicles, so I had to snap them before trying to thaw them out.

We helped make one of the school's canoes by working on the fibreglass on a sunny morning in the beautiful sloping field between Rhowniar and the sea. I also remember going to the lovely cottage at the bottom of Rhowniar's drive for nature talks and learning to make leather bangles, which I still have.

I think the staff here supervised our night in the woods, where we made camps with a piece of tarpaulin, branches and whatever we could find. The aim was to be out of earshot of each other and to experience the woods alone with our thoughts, possibly seeing badgers. We were all alone, but the silence of the night was punctuated by the ripping of Mars bar wrappers and the crunching of Crunchies as we had all taken so much comfort food with us!

There is not enough space to describe all my memories, especially of the friendship, support, encouragement and humour among fellow students. I also remember, by the second expedition when we all felt at one with Rhowniar, walking through what seemed to be a very high up and heavy bog interspersed with pine trees, with beautiful views, on a sunny morning. We passed a crackly transistor radio among us and listened avidly to the wedding of Princess Anne and Captain Mark Phillips.

The Outward Bound course was designed to be character-building for young people - I feel it made a huge impression on me and my partner says that I frequently mention it and have done over the last 20-30 years - it did form me in a positive way.

There was no question of refusing to do anything, including the very high Ropes 1 and Ropes 2, rock climbing (including a terrifying, for me, "layback"� - sitting horizontally with feet on one side and my back on the other side of a cleft in the cliff, leaving only a substantial drop under my seat), abseiling, potholing in the slate mine, walking miles on the expeditions with heavy old-fashioned canvas rucksacks. Everything produced a great sense of achievement and the instructors were very skilled and careful in helping us to achieve this. Even if people did not have every skill and ability in exactly the same way as others, we were taught to recognize and value our own skills and abilities and to value ourselves.

At the end of the course, each student was left to make the decision as to whether they were worthy enough, had tried hard enough and indeed were confident of oneself enough to receive the yellow badge inscribed "To Serve, To Strive and Not to Yield"�. I feel everyone on my course deserved it and I still have mine.