Jim Cassidy
Back to alumni stories 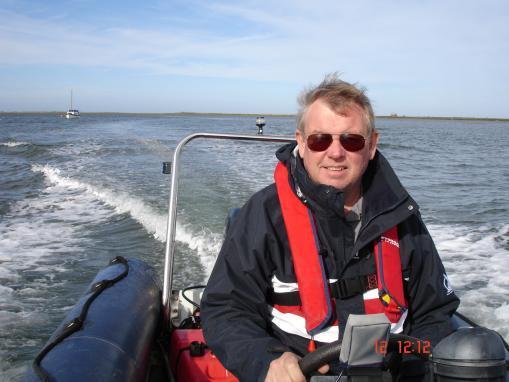 As a young Police Cadet in Northampton I was sent on course E206 at Outward Bound Mountain School Eskdale from 12 October 1970 to 6 November 1970. I know this because, apart from the memories, I still have my original journal that we were encouraged to keep during the course. That must say something about how significant an experience it was".

So rather than write a story I thought, that as my journal entries capture what I was going through at the time, I would offer some extracts from that version of me from 39 years ago.
12.10.70 - ".arrived at the school by means of a miniature railway" divided into patrols (I was in Scott), shown our dormitories and taken to the comon room to await our tea, bed and lights out 10pm.
13.10.70 - Twenty five past six we were woken and dragged down to the stables for a cold shower"..After lunch we had a session of circuit training, a running tour of the school and a swim in the tarn!.......lights out at ten.
14.10.70 - "..six forty we had a cold shower. First Aid, knot tying etc with instructor (Alan Derbyshire)" out on the ropes course, but I did not make much progress as I was afraid of some of the obstacles (God I vividly remember that now - my palms are sweating!). "TE" took us for circuit training which nearly killed us as usual followed by steeplechase - 6min 18 secs = honours for me!
15.10.70 - 6.30 had a nice change a warm shower!! Duty patrol today - dishwashing for hours.
15 to 17 Oct 70 - first camping exped. "..had to walk miles. It was good to stand on the peaks of the fells".moment of triumph came as we stood on the peak of Sca Fell"..thoroughly exhausted but at least we had done something most of us had never done before. In my opinion it was a bit hard for a first expedition".
18.10.70 - Our first Sunday".no cold shower and an extra half hour in bed.
19.10.70 - cold shower at the usual time, Duty Mountain Rescue Patrol today".preparing emergency packs in case called out. "TE" took circuit training again". Abseiling practice which I really enjoyed" at 8 o'clock an interesting talk by "Chizzer Childs" on climbing.
20.10.70 - communication session - was quite funny at times. After lunch Ropes course - excelled myself 24 points out of 25! Afternoon canoeing with Dave Challis - only capsized once unlike some".duty patrol - loads more washing up,
21.10.70 - Roger was duty student - woke us all up at 20 to 4 - set his alarm wrong"..canoeing on River Esk - shot some rapids it was very good fun. After dinner filmed by Norwegian film crew whilst rock climbing (making film to promote OBMS on the continent). Evening - "Coffee House" all sat around discussing subjects such as the Royal family and world problems which no-one knew anything about - waste of time.
22.10.70 - more filming I was lowered down a rock face in a stretcher - a really great experience. After dinner off on Solo expedition (although I have no notes of this event I vividly recall being abandoned for 24hrs with no food, a sheet of plastic, some twine and a penknife on a bleak sand-dune on the NE coast - I was freezing, hungry, bored and very alone).
24.10.70 - "..pickedup and given very welcome bar of chocolate and an orange (I remember a big Geordie lad called Dave eating both of his without taking the wrapper or peel off!).
25.10.70 - Sunday lie in and no cold shower - steeplechase time 6min 4 secs - 14 secs better than 1st attempt.
26.10.70 - Linbeck Crags climbing, completed 4 climbs including 2 x severe grades. It was great fun.
27 Oct to 29 Oct - climbing expedition Seathwaite". Good sleep was had " climbed Brown Slabs Crag (severe 80 foot) and Ardus (Severe 150 foot, final pitch Hard Severe 25 foot) - chuffed to bits but terrified!
29.10.70 - hiking" Sca Fell Pike and Great Gable - weather very bad high winds, thick mist and heavy rain. Inscription on top of Sca Fell reads:
"In perpetual memory of th emen of the lake district. Who fell for God and King. For freedom, peace and right, in the Great War 1914-1918.
This summit Scafell was given to the Nation subject to any commoner's rights and placed in the custody of the National Trust by Charles Henry, Baron Leconfield 1919"
Very poignant to stand and see that monument in such a bleak and isolated place.
30.10.70 - never stopped raining all night, rivers crashing down the valley".. walked 5 miles in pouring rain through swollen rivers and streams to Wastwater Hotel to be collected ". Our spirits were high we had enjoyed our walk.
31.10.70 - " canoe relay we did very well, proved to be good fun. Afternoon cross country - I did well finished 15th from 96 in 39mins 44 secs. After tea was concert time - really good fun. Our own effort in the field of entertainment could have been better if only certain members of the patrol had shown some interest".
1.11.70 - Sunday - patrol finished 2nd in volleyball competition ".. packing for final expedition.
2.11.70 - our last circuit training of the course!! We did well in agility, wall and beam competitions - could move up in the tables.
3.11.70 - TE was duty instructor and we had a 25 second cold shower! Full day hiking on expedition, Burnmoor Tarn, Wast Water, very high winds up Black Sail Pass, Kirk Fells, up Great Gable camped Styhead Tarn.
4.11 & 5.11.70 - more hiking up Sca Fell, Esk Pike, Bow Fell, Langdale (got lost), Wrynose Pass, Eskdale. Bad weather for most of the time.
6.11.70 - another extended shower. Got weighed I had put on 6lbs" surgery for a 10 second medical, bank to settle up for damages, losses etc - had to trade in my boots - no money left to buy tie and badge. Passed the course". Did not sign the book as I had been smoking early in the course, really felt guilty when the others went forward but at least I had passed.

COMMENTARY - as I was writing this I was overwhelmed by memories, mostly positive, about the experience, people and impact OBMS had on me. Clearly achievement, performance time, team work and overcoming fear and obstacles feature in my log and I can honestly say it was one of the best life experiences I have had - I still do canoeing now albeit more leisurely and I navigate my boat at sea, so I continue to benefit from the skills and confidence I gained form going to Eskdale.
The staff were brilliant, TE was a Canadian masochist who drove us to exhaustion - but who made me fitter than I have ever been before or since. Alan Derbyshire was our patrol instructor and deserved a medal for coping with us so well.
I would love to see the film of us made by the Norwegian crew if it still exists.
I am proud to be associated with the Outward Bound movement and would happily recommend their work to anyone thinking of attending training.
Jim Cassidy
Course E206 (Scott Patrol)