George Worrall
Back to alumni stories 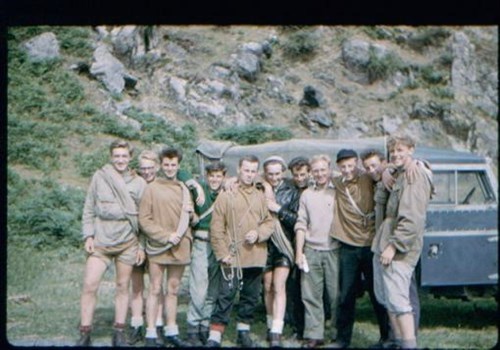 MEMORIES OF TEMPORARY INSTRUCTOR OF 50 YEARS AGO

In 1957 I was a 23 year old RAF Navigator when I first responded to an invitation to personnel of the armed services with appropriate experience to apply for one month's secondment to Outward Bound Schools as temporary instructors. In those days the nature and purpose of Outward Bound Schools seemed to be much more widely known of , probably because the introduction of similar challenges such as the Duke of Edinburgh Award Scheme were yet to come . The revival of its image as encouraged by the Shard abseil event is exciting.

My credentials at that time were at least satisfactory. I had my King's Scout Badge (George VIth was still on the throne when I received the award!), and I was well used to the challenges of outdoor life in all weathers and for going it alone. I had also continued vigorous hill walking excursions with my like minded RAF friends. I was fit. Nevertheless I was not complacent. Though I had been a Group Scoutmaster at an RAF Station and had taken teenagers on camping holidays and other outdoor pursuits, I had little experience of taking parties of young male adults on more challenging adventures and I was somewhat ignorant of what I might be expected to do. But I was quite excited at the prospect and was encouraged by a colleague from whom I had already learned a lot about demanding outdoor pursuits and who had already participated in the scheme, albeit with more impressive experience than I had. (Stewart Ward was later to serve as Equipment Officer and Photographer on the successful 1960 Joint Services Expedition to Annapurna II, a 26000 foot Himalayan peak. Another member of the at same expedition was Christopher Bonnington). My experiences as a high altitude high speed jet bomber navigator also helped me to exude an appropriate level of self confidence. My background and my profession would not, I thought, disappoint the Outward Bound community.

I think I first arrived at Aberdovey Outward Bound School a day or two before the next course intake in early May 1957. My second visit was in 1960. The Warden at the time was the redoubtable Captain Fuller as sure-footed a leader as you could ever find. He ran a very disciplined ship indeed and required as much of his staff as he did of the course members. But he was fair and would never let an end-of-course report slip by without encouraging adjustment. He did not want anyone to believe that they had not benefited from the course, which of course they must have. I had great respect for him and his judgement; I think we all did.

His 1st Mate, as it were, was the good-natured, reliable and dedicated Sam Haller (or Halley or ?) who often wore his seaman's peaked cap. He was an Olympic standard canoeist and was otherwise a very competent sailor. Other sailing instructors were no less impressive and included a real old salt called Nelson (what else?). Another instructor shared my service provenance having been seconded from the Army. The chef was an attractive young lady. The one favour I had of her was that when I returned from one expedition I drank over a litre of cold fresh milk straight off.

Each instructor was allocated a Watch comprising a dozen or so course members. I cannot now remember whether we, the instructors, had private bunks at the end of the Watch dormitories or slept elsewhere at the school. The courses were exacting and the instructors were expected to set an example. I occasionally joined my Watch in the obligatory early morning (6am) dip which was memorably icy. But my most challenging example was to demonstrate leaping into a fire blanket. I showed the young men how to hold the sturdy canvas blanket taut and safe and invited the first of them to leap into it from a third or fourth floor window. They asked me to demonstrate. I had no choice. It was demonstrate or depart in shame. I peered out of the window into the chasm which separated me from the tiny blanket below, urged the ‘rescuers’ to take the strain and, before I could change my mind, leapt into uncertainty. Without revealing any of the unease which was within me they each in turn made the same desperate leap of faith and the day was won. But this was not the only event which today would be banned by European Law unless I had a certificate qualifying me to leap into fire blankets, no doubt wearing a safety harness and with emergency services attending.

One day I was asked to take a crew of four out on to the estuary in a clinker board sailing dinghy.

Up to that time I had only crewed one for short periods. I had no significant experience at the helm. I revealed my lack of experience to the managing staff but I was assured that I would be alright. I wasn’t entirely so. I managed to somehow get a rope wrapped around the rudder and we floundered about as we tried to disentangle the snag. It took some time and used up a lot of the lesson, which was just as well really. I was safe, but not immune from human error.

Other 'firsts' for me were that I ran as pacemaker for one lap of a mile race and demonstrated throwing the javelin. Athleticism was yet another skill which the Outward Bound experience dragged out of me. On one sailing excursion whilst cajoling my 'lads' into ever greater effort I managed to douse an old salt’s battered white cap in the bilge water as I hastened to flick the sheet rope which I was holding over his head as we gibed. “There’s no need to hurry with the mizzen clew,” he growled at me toothily. Don’t you just love the quaintness of such vocabulary. I also joined my Watch on its three day ocean going expedition in a Ketch with a dipping lugger rig, I think. It was a roller coaster ride in which the ordeal of eating grilled fish trawled up along the way was a real challenge to not only my constitution.

The two major overland expeditions, each of three nights, which I led, called on all my past experience and tested my physical endurance to its limit, but I managed to hold my claim to leadership intact. An account of one such expedition appeared in an article which I wrote in summer 1960. We travelled fully self-sufficient and our backpacks had all we needed apart from water and wood for fuel for our cooking needs. The cooking, cleaning and fuel gathering were shared duties.

One or two course members were not used to the privations of 'rough' living. The thing they missed most were flush toilets. But didn't we all! The strenuous demands of each day ensured a good appetite for whatever was served and a good night's sleep. I would be surprised to learn that anyone completed such expeditions without feeling a real sense of achievement. They weren't strolls in the park: but it was a tradition to arrive back at the school as if it had been. The returning Watch would pause just out of sight of the school, tidy itself up, and break into a trot for the last 100 yards. On one occasion, as we ran in, there were visitors in the forecourt with the Warden. They were very impressed.

But the days were full of good humour. One day I went down to the jetty to welcome my Watch back from a day-long canoeing expedition led by the man with of Olympic class ability. I could see they were exhausted. I hailed one young fellow from Liverpool and asked him how the day had gone.“Cor, Sir, if I’d ‘ave ‘opped aht, I’d‘ve been ‘ome”, he replied.

I do not know how the arrangement for Service personnel to spend time as instructors at Outward Bound Schools came about or how long it lasted. Maybe it still happens. But the Armed Services were ever supportive of sport and adventurous pursuits and perhaps saw some possibility that those attending Outward Bound courses might consider a career in the Armed Forces. But I was certainly never briefed to lobby for recruits. Whilst at the schools we received our normal service pay. Whether we were boarded and lodged at the schools free of charge I do not know. But we did not receive honoraria or similar rewards, nor did we expect them. The experience was the reward.

I have been looking at the Outward Bound website and note some obvious and not so obvious differences between now and 50 years ago. Then we did not even have a website of course. There were no computers, mobile phones or GPS systems. We did not wear hard hats, even for climbing, nor did we experience the need to carry a personal supply of water everywhere. I think the minimum age for acceptance onto courses was 15. The greatest difference was that there were no female students and no female instructors. I think some of the outbuildings at Aberdovey have a more comfortable look but the main house looks much the same. The transport looks slicker too. I think we had only a couple of land-rovers then. But of course we did not know what was to come and were quite happy with our circumstances. Perhaps because then we were not so bound by safety regulations I suspect that some few of our activities were a little more daring, a little more punishing and a little more exhausting. The age of litigation had not yet arrived. I think that attitudes today may impose greater constraints on programmed adventurous pursuits. But I could very be wrong about that. The Shard abseil contradicts me. I think I'd rather jump into a fire blanket after all!

To take a look at photos from George's time at Aberdovey - please click here.