George Smith
Back to alumni stories 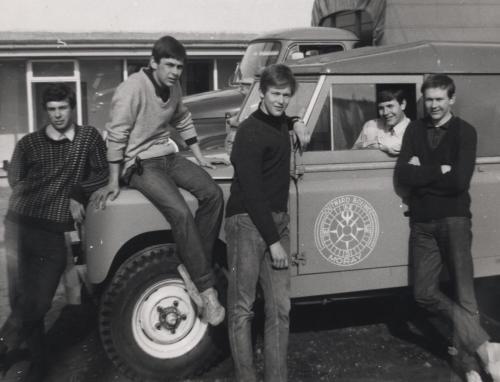 Tonight I found your web-site and, for interest, enclose the attached five photographs (click link to view) which I took at the Outward Bound Moray Sea School back in 1967.

I attended Moray from 20th March to 14th April 1967. At the time I was a 17 year old police cadet from Brighton, Sussex. I was sponsored by the local Borough Council and, I recall, the cost was £50. I was required to keep a full diary, which I have just found along with the photographs. Reading through the diary tonight brings back the experience in vivid detail - and it’s difficult to believe it was some 47 years ago.

The first photograph shows my watch by the Outward Bound Land Rover. I am the one sitting on the wing. The next four photographs (click on link to view) are of our three day expedition in Glen Affric. The first is at the base of the mountain; the second is half way up when visibility became very poor and we were roped together; and the remaining two are at the summit. In the group photograph at the summit, the instructor is Mr SWANSON - in the centre with the hat.

From my diary, I note the following: I was in Churchill Watch. The other lads in the Watch were: Dave (who cut his finger opening a tin and was taken to Elgin Hospital); Jock, Bob, John, Eric, Chris and Duncan. The staff included Mr CLEGG and Mr Donald for sailing; Mr WILLIAMS and Mr SWANSON for hill climbing and Mr Brutell for gym.

I recall I travelled on my own from Brighton to Scotland on an overnight train. It was the first time I had travelled and been away from home. I thoroughly enjoyed the course. It made me feel more confident and grown-up. It was my first experience at sailing - a love and passion I continue to enjoy to this day. I was also taught map reading - a skill I still use. The course was good grounding for my future - where I became a detective chief inspector and other interesting roles within Government!