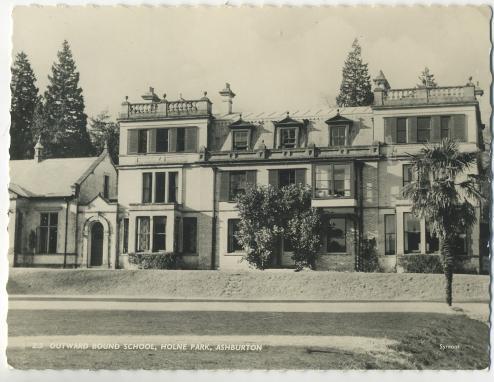 I went to Outward Bound (1964), as did my husband, John Vickery (1963) and our daughter, Paula Vickery (1978 - now Vicary) and we all have the happiest of memories. It was a significant and memorable part of all our lives. I still have a photograph of my husband jumping off Berry Head, 40 foot down to the sea!

Both John and I were police cadets in the Bristol Constabulary and were sent by our employers as part of our training.

On the last evening of my course, as the traditional entertainment, I remember the staff did a 'This is your life' on a lady called Doreen Whyte.

John and I married in 1968 and our daughter was born in 1969. By this time my parents had moved to Hampshire, and so even though Paula was still a very tiny baby, we took her down to show her off to Mum's friends and neighbours. One of those neighbours turned out to be no other than Doreen Whyte!

Doreen had a cuddle and declared that this baby was real Outward Bound material - she knew her stuff, as imagine our delight, that when our daughter grew up she wanted to go to Outward Bound so much, she raised the funds to go herself!

History has repeated itself so much that Paula also joined the police and married a man with the same surname - if a different spelling... we are waiting to see if history repeats itself ... will her two children also go to Outward Bound??

(Fran kindly posted us this story and we have uploaded it to the website with her permission.)