Duncan McLennan
Back to alumni stories 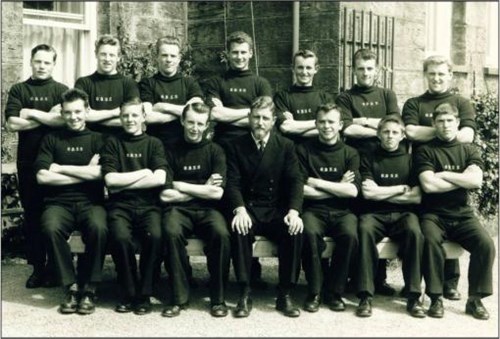 After completing the Cadet Course at The School of Navigation in Glasgow, I applied to The Blue Funnel Line for a position as a Midshipman and was accepted, subject to receiving a satisfactory report from The Outward Bound School at Aberdovey. I was enrolled for course 181 and was instructed to present myself at Penhelig Halt on Saturday 26th July.

The journey from my local station in Troon, Ayrshire involved three changes of train and it was evening before I arrived, with my ticket well and truly punched. A handful of other boys also got off the train, and we were met by one of the instructors and taken by Land Rover to the school. There we were each allocated to one of the nine watches, and I was the last of the fourteen boys to arrive at Drake Watch, where I was relieved to find the atmosphere was friendly.

The next day was a Sunday and at 6.30am we were rudely awakened and told that we had 30 seconds to get up, put on a pair of shorts and sandshoes, find a towel and muster outside the hut. There we had five minutes of P.T before jogging down to the showers where the drill was explained to us. When the whistle blew we had to pull on the chain and stand under the freezing water for ten seconds - it didn't half wake us up!

For the rest of the day we operated in watches. In Drake we spent about an hour on the "monkey ropes" and from there we went to the "wall", a wooden structure some 10-12 feet high, which we had to climb over as a watch. After that there was a spell of circuit training and then we went to the athletics field where we had a go at some of the events we would be measured on during the course.

While at Aberdovey, the routine followed much the same pattern as the first day, although athletics were interspersed with dingy-sailing, canoeing, boat-pulling and sailing in the cutters, orienteering and "launching"� the life-boat. The training was intended, amongst other things to prepare us for the Cader Idris expedition at the end of the course. Cader Idris is a 3000 ft mountain, and we would be climbing it in the course of a thirty mile hike. When the time came we took it in our stride, and I can vouch for the fact that I was fitter than I had ever been in my life before, or was ever likely to be.

Looking back, I don't think that I would have volunteered to go on the course, because I would rather have gone straight off to Sea at the end of the Cadet Course, but in retrospect I thoroughly enjoyed the experience and I certainly learned a lot of things about myself. I discovered that I was capable of achieving much more than I had imagined. On balance, being a Watch Captain was probably an advantage because I didn't have time to feel sorry for myself when things got tough (except, of course, when I was sea-sick on the "Golden Valley"�!) It was my job to encourage the others and you can't do that and feel miserable at the same time. If am honest, I am extremely grateful that I went there in summer and not in the middle of winter, but if it hadn't been for the Blue Funnel Line's recruitment policy, I wouldn't have been there at all. Such are the twists and turns of fate.