David Short
Back to alumni stories 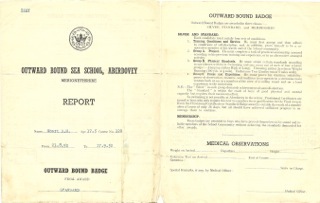 At the end of August 1952 I headed off, at the age of 17, by train from London to attend a month’s course at the Outward Bound Sea School in Aberdovey. I had just had a summer holiday after finishing a 3-month course at King Edward VII Nautical School in London. I was heading for a life at sea with Shell and the London course and Outward Bound were requirements before I could start.

I don’t remember the journey up to “Penhelig Halt” from Paddington, except for seeing a larger lake than I had ever seen before on the way; I’m assuming it was Bala Lake. It was late afternoon when I, and a number of other “young men”, headed for the school. We were met and told we had to walk to the school, and immediately we were kitted out with uniforms, weighed and measured, assigned to watches. From then on, until lights out at 10:15, it was non-stop - eat, prepare bunks, and attending lectures about what we could and should expect.

The start of every day was a cold dip. To begin with we went down to the beach where we had to get completely under the water. In my log book I note that, “the water is surprisingly warm,” – only a 17-year-old could say that! But by a week later we were having cold showers, with Mr. Martin supervising. It seemed he wasn’t convinced it was doing us any good unless we danced around a bit! A couple of days later on we were back in the “sea”, and I commented, “A dip again, but now we are hardened to this ingenious way of complete awakening.”

Our days were filled with chores, such as painting the chapel, washing out the boat shed, washing off and cleaning the canoes, or bunkering, polishing, cleaning, and “mucking out” the Warspite, or pulling it around to the dry dock; helping the gardener; and lessons in knots and ropes, splicing, athletics, sailing, lifeboat drill, life-saving. Apart from the marine oriented activities the emphasis was on fitness and meeting challenges. Our “Report” card showed how well we had achieved in various athletic activities – Swimming, Jumping, Throwing, Running – Sprint & Long Distance, and “Expeditions”.

The expeditions were held as an epitome of achievement, and preparations for the “Big Hike” were forever in the air. Through smaller hikes (for which we had to keep meticulous records) we came to the test!

Here’s my entry in my log book for that day:

The day of the Big Hike
The morning was started off with reveille at 6 o’clock and shower.
This weekend was enough to be all fit and ready to catch the 8:40 train from Penhelig Halt.
At Fairbourne we left the train and proceeded to the main road — in a SE direction. From the road we struck off onto a path which curved northwards and then southwards to, and through, a wood. Past the wood we still carried on along the path to a farm.
We had rather a nasty scare at the farm as we met, face to face, a bull with a ring though its nose. But — fearing nothing — we went straight through, hoping the bull would give way – it did. Phew!
We left the track at the farm and cut across country; gently climbing. The land was apt to be boggy in places and covered with couch grass. We passed 974 and continued on, skirting Braich Ddu. The ground started to show signs of heather and broom. We soon started to ascend the westerly end of Cader Ridge. There was a very stiff climb to 1913 along a wire fence. The ground seemed peaty and stiff heather bunches abounded. To our left there was a drop of about 1000 feet to the valley below. It was a wonderful sensation to look down onto Llyn Cyri and the other lakes — it was like being in an aeroplane. The view reminded me somehow of Switzerland.
We continued on the ridge to 2040. Mr. Martin was not there so we left a note for him, telling the time of arrival, departure, and condition of party. This was at 11:30 a.m.
After waiting for five minutes we started off southwards, down the spur of Afon Cader Valley. The valley was really beautiful — the river running through green meadows with trees all along the sides.
We struck a path leading along the river which found itself at the secondary road leading through Llanfihangel-y-pennant. Where the path met the road was a monument telling of a certain Mary Jones who walked to Bala for a bible at the age of 18.
When we had found the Temperance Hotel, Mr. Morgan was not there. I therefore signed the visitors book for the watch to show we had been there.
Still plodding on we proceeded past some notices pointing out the existence of an ancient monument. It being half past the hour of twelve we thought it would be an ideal time and place for lunch. The ancient monument was what was left of an old castle – Castell-y-bere.
The steward shad surpassed themselves — our lunch consisted of two large loaves, half pound of butter, lump of cheese, a Swiss roll, six oranges, and six sausage rolls — all this for the six of us. (Break of 40 mins.)
Feeling much happier (with-) in body, we plodded on along the road for a mile and a half till we came to a bridge. At the bridge we again cut across country, over hills, to get to Dol-goch.
We managed to get onto a track leading across the hills through Ty-mor farm, and another, to the valley. Upon hitting the road we turned eastwards to the Dol-goch Hotel.
Most of the officers were congregated in the garden drinking tea — but we plodded straight on up to the waterfalls.
The falls were set in a beautiful wood and ran over boulders and rocks — singing and roaring in a paradox of happiness and anger. The falls — three of them — stretched over about a mile. I think we were all struck by the beauty of the whole course of the river.
Following the river, we climbed, steeply at first, up to Trwm Gelli. Dear old Trwm Gelli — how we had sworn, going to it the first time, now it was a welcome sight. Sore feet and broken shoes had developed by now, but home (!) was in view.
Up and over 1743 like lambs down past Dys-yr-nant farm to Happy Valley Road.
At Dys-yr-nant we were met and surrounded by the Mad farmer’s dogs — eight of them! We marched along the road like Trojans off and up to Bwlch, down to Abergroes and along the road tp the school.
We hardly noticed that last bit home from Dys-yr-nant. To see us charging along the road anyone would think we were just starting. What home sweet home will do!”

My records show that we arrived at Fairbourne at 9:20 in the morning and arrived back at the school at 6:05 in the evening — a total of 8 hours and 45 minutes. Our watch came in second.

Memorable times and people were:

• Mr. Brown waking us up with, “Heave-ho! Heave-ho! Lash up and stow!”
• The Padre (Rev. Hughes)’s lectures which seemed rather insignificant apparently, (from my notes) although he could be thought provoking on religious beliefs, from what I remember.
• Rowing with Mr. Cushin – boy did we ever learn how to row!
• Athletics with Mr. Martin and Mr. Langham-Brown – they just knew how to get that extra ounce of ability or talent from us. I just wish I could have proved better in some of my “tests”.
• Mr. Fuller and the “Expeditions”- he sure kept us on our toes as to what he expected and how we were to report what we did. Mr. Fuller also took us for work on the canoes (actually I believe they should properly be called “kayaks”) ,but we were taken out, shown how to roll them over and right them. Each time more water got into the “cockpit”. My partner and I (don’t remember now who he was – me culpa!) were really good at this and had to keep doing it until our canoe was totally inundated. What did we have to do? We were told to take our canoe to the shore, turn it over to empty out the water, and get back into the practice! Boy, did we learn!
• Ropes and “whippings” with Mr. Davies, with whom we learned how to do palm and needle whipping as well as “ordinary” whipping; and Mr. Hugill for splicing.
• Mr. Evans for elementary British lifesaving drill and “Schafer Resuscitation” and some Australian lifesaving. He was also the one who took us to the “monkey ropes” which included a cargo net, a Tarzan rope and horizontal ropes. This included crawling along a rope for about 20 yards and then progressing to the next tree by means of 2 wires — and then down a rope ladder; up over a net (with hands only) and then up and down a hanging rope.
• “Boatwork” with Mr. Gibson – rigging a cutter for sailing and tacking down river form the school.

The whole time, from what I can recollect, was about competition – either against one’s own achievements or against one’s cadre – i.e., in those days, one’s Watch or team.

All of our time was organised from waking to lights out with a typical day being:

It was not all work however, and somehow we managed to get enough time off to attend the local movie house, the local chapel, and, for me, to connect with a local girl of my age, Eryl Williams. I don’t remember how, but Eryl and I managed to develop enough of a connection that it lasted way into my time at sea. She even visited me at my home in Bristol later that year. The first time I mention her in my Log Book is on September 6th, where I meet her from the train from Dolgelley. We walked over the hills and down to Happy Valley, and then to Towyn and back in the evening.
I also had time to go sunbathing on the beach on a Saturday with my friend Ron, while we watched the Yacht Club racing. I remember that we saw Mr. Davies on this occasion romp home with a good 2-minute lead on the rest.
I even remember going down to the “village” and going to a café and getting (what I thought was) a wonderful meal of egg and chips. I also remember how nice the people were to us.

There are so many memories of that time, yet they can all be encapsulated in the one sense of bonding and personal explosion! What a wonderful experience we had – boys from so many different backgrounds and experiences, yet in the challenges to which we were exposed we were so totally equal.