Colin Fry
Back to alumni stories 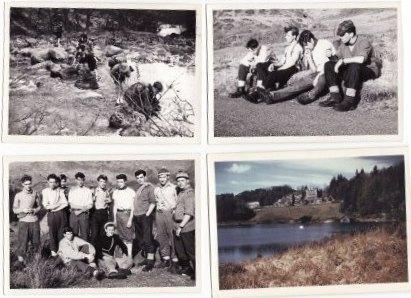 IN MEMORY OF TONY TITLEY- MY STORY

A young man on the same course as me, but who I never met. I have however, thought of Tony many times since during athletic and physical challenges I have faced.

50 years ago this year whilst a Dorset Police cadet, I went to Eskdale for a month as an 18 year old. It was life changing for me and I could not have anticipated what lay in store during the course with its exposure to adrenalin rushing challenges I could never have expected.

I never liked heights and scaling then abseiling down a high rock face meant I had to find courage I didn't know I had. If ever I thought I could just take the month in my stride I was wrong. Fortunately I was fairly fit and able to to undertake the athletic challenges with some success. I particularly remember my Instructor Tony Greenbank and his enthusiasm at the top of a strenuous hill in the 3 mile road run shouting "come on young Fry you can do it" as I fought away near the head of the field.

It was the 3 day expedition at the conclusion of the course that has remained in my memory ever since and which perhaps shaped my response to many of lifes challenges. I was the leader of a 4 man group and we had to trek and climb a number of peaks with map and compass. We were to spend 2 nights under bivouac in holes, against walls or grass banks or any structure we could find. The experience would prove far tougher than anything I have endured before or since.

It must be remembered that in those days communication was minimal. We had no radio, person to person "walkie talkies" or mobile phones (which hadn't been invented)! Immediate contact with Eskdale in the fells was therefore impossible. We did have to make pre arranged unmanned contact points where we had to sign in and failure to make the rendezvous would be the only indication something could be wrong.

The weather throughout the expedition was awful and each night we bedded down as best we could, but able to put on dry socks (as trained), only to return to the wet ones and our sodden boots for the next days trekking. How I hated those wet cold socks that next day! On the 3rd and final day all we wanted to do was complete our tasks and return to Eskdale. Our wisest decision and I believe that which saved us, was not climbing the last 2 peaks because of atrocious weather which was hampering our progress.

Some of our group could go no further and we found what little shelter we could by a wall where we erected our bivoucs, near to a road and a contact point where we hoped we would be found. What we didn't know then was that every group had done the same and Roger Putnam the Chief Instructor realising the situation had dispatched colleagues to find us all. When we were found I will never forget the inability we all had in moving our legs because of the on set of hypothermia. We had to be helped to get into a vehicle and were so glad to get back to Eskdale, safety and relative comfort.

Some groups had arrived back before us and then word got round that two groups were in trouble, when two students (one another cadet from Dorset) had got back to Eskdale seeking help for those who were in trouble and being severely affected by the awful weather. The seriousness of the situation became apparent when volunteers were sought from assembled students to bring them down from the fells. I was one of the volunteers and well remember the "flame torch" procession as we climbed the fell paths with the Instructors to find the students. We carried their stretchers back to Eskdale taking it in turns but not knowing the serious condition of Tony and another student.

The next morning we were all assembled to be spoken to by Roger Putnam. His sadness and emotional state was obvious when he told us that Tony Titley had died and the second student was in a serious condition.

I have never forgotten Tony. I didn't know him, but he was a young man like me who was just starting out on a life full of promise only to have it taken away from him so tragically. His death had a profound effect on me and I am sure many others who were there at the time.

On 6th August 1960, there was a Coroner's inquest into what had happened and it was concluded that Tony had died of natural causes. As reported in the British Medical Journal, Tony and some of his colleagues could not go on due to the extreme conditions (like us they bivouaced). Roger Putnam said at the inquest that some thirty thousand students had completed the Outward Bound course and there had been no fatalities until Tony. As the Coroner said Tony's tragic death had been due to the atrocious weather conditions pertaining at the time.

Neither "Eskdale" or the students were to blame for what happened. Communications in the fells and mountains were virtually non-existent, but the tragedy served as a reminder that the extreme and unexpected can occur when the elements play their part. My group was found and rescued but we were all to aware of the consequences had we not been so lucky.

I subsequently returned to Eskdale as a Temporary Instructor and did contemplate a career with The Outward Bound Trust. However I remained in the Dorset Police retiring after 37 years as Chief Inspector/Deputy Commander at Bournemouth. I continued running enjoying success at British Police, County and Regional level.

I have never forgotten Eskdale and believe I became a better person through Outward Bound. I have also never forgotten Tony Titley and whilst running in fairly extreme snowy conditions (for Dorset) recently, my thoughts returned there and prompted me to write "my story" which I dedicate to Tony.

Photos: Top left: Traversing a river Top right: Exhausted by the side of the road (one of the few fine days we had that month). I am 2nd from left sitting by side of road! Bottom left: My group of April 1960 (course 101). My group was: K. Miles, "Scottie" Scott, Martin Jones, C Bate, Peter Brass, A Hetherington, Peter Warren, Patrick Hutchinson, George Carruthers and Paul Nelson (where are they now!) I am the one in the centre of the photo with a rucksack. Bottom right: Eskdale (bet it's changed)