Chris Johnson
Back to alumni stories 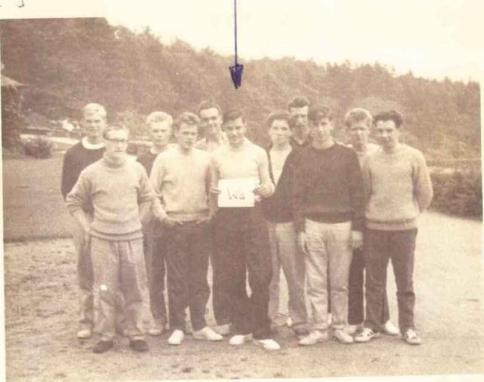 It was a chilly day when I set of with my Dad and suitcase from Chadwell Heath in Essex to London to catch a train to Seascale in Cumberland. As I was 17 years old I had never been further than home before than Southend-on-Sea, so what I was about to encounter was for me a foreign land.

I arrived in the dark, was bundled into an old bus and delivered to a place that Count Dracula would have been proud of! Sharing a dorm with 8 other boys who I had never met before - my first thoughts were "what is going on!" It was my first experience of being on my own without help from Mum or Dad or my brother and I wondered how I would cope. As it happened I coped quite well and after the initial shock wore off, I mucked in with rest, did what I was asked by my instructor, Tony Greenback (a lookalike of the actor Brian Rix) and soon got the hang of the processes and procedures.

But, I wasn't prepared for the Whimsey, the plunge pool that felt like -20c. "Go right under boys" said the commandant overseeing our morning dips, who the hell thought of that idea, what about health and safety! But I tell you what, after you have run round a lake and towelled off you are as warm as toast and dying for breakfast, and its only 7am!

My first try at rock climbing was less than successful, only a small climb (15 ft or so) at the back of the house. Three or four of my group shinned up there like mountain goats. I am up for this I thought, but wrong, I was straight down to the bottom leaving my knuckle skin on the rocks. I still have the scars to this day as a constant reminder of the fact I wasn't really cut out for this sort of thing!

The next trial was canoeing. At this time I could not swim, so the thought of me floating around in a cigar shaped receptacle with only a paddle for company filled me with lets say terror with a capital T! It was a nice day, the lake was calm and the sun shone on and off. We started off with a sprint with the wind behind us and reached the other end, only to be told to go back again! It was tough and the blisters on my hands afterwards were the size of hot air balloons, I had plasters on them for days!

The three day expedition was next, going off on your own, reading maps and compasses, cooking your own food, setting up camp etc. We got lost 4 times but did get back on track! The only downsides were the bivvy leaking like a sieve and the sheep nicking the porridge that had been left outside to soak overnight! However we made it to base and the scenery and mountain views when walking on the tops will stay with me for the rest of my life.

This year is 50 years since I first set foot in Eskdale. I will always have fond memories of my time there and it certainly gave me more confidence to face my future life. Although tough at the time, I still believe it was worth every moment and despite what I have written above in jest, I enjoyed the experience immensely.