Charles Carter
Back to alumni stories 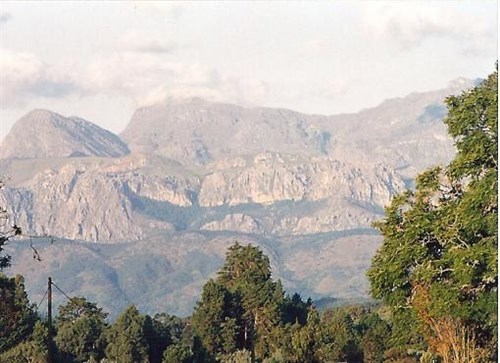 I approached the Outward Bound school along a dusty, bone jarring road.
The truck windscreen filled, with a magnificent panoramic view of the grey buttresses of the Chimanimani mountain range, rising imposingly from the green foothills into a blue, heat hazed African sky.

Two days earlier, I had left England, aged 19. In my pocket was a letter from Bill Bailey, the Warden of Melsetter Outward Bound school in Rhodesia, offering me a year's employment as an Instructor.
A gruff voice greeted me as I stepped down from the dusty vehicle.
"You must be Carter. Go to the equipment store, pick up a backpack and rations for three days. I shall see when you return"�

The Chief Instructor, Owen Davies, a proud Welshman, who's father was the Warden of the Lake District Outward Bound school at Ullswater, was a little less taciturn. Nevertheless, I was very aware of a critical eye sharply focused.
"You'll need to acclimatise and get a feeling for the mountain. Good luck and watch out for Leopards!

With a mixture of excitement and that all important Outward Bound partner, trepidation, I set out on my solo expedition. Pack on back, map in hand, I studied the route. The first of many game trails beckoned me to follow, only to taper out in impenetrable bush or under an insurmountable crag. The mountain knew all too well how to confuse the eye and trick the senses.

A thousand vertical metres, chest heaving, eyes stinging with sweat, I scrambled up a final precipitous gully and to my immense relief, found myself on top of the first range of Rhodesia's Eastern Highlands, with magnificent wild and rugged country stretching out east into Mozambique.

I descended from the escarpment, into the parched veldt of the Bundi plain. The African heat pulsed in my head as I threw off my pack, stripped off my sweat soaked shirt before diving into the seductive embrace of a deep and refreshingly cool, mountain pool.

The first plume of water was surprising, the second confusing, but the third was downright alarming ! Looking up, through squinting eyes, I met the withering gaze and curled back lips of an enormous, angry, dog baboon. Another projectile descended from the cliff, exploding into the water with un-erring accuracy, right beside my up-turned head.
I left the water, quicker than I entered, whilst the surrounding cliffs resonated to his deep mocking bark and the delighted accompaniment from his admiring troop.

That first night, I cooked up some "graze"�, laid out my sleeping bag under a low overhang of rock and settled down to kip.
Beside me, I had placed a stack of dry wood to feed the fire and keep any Leopards at bay. I awoke with a feeling of un-easiness. The African night full of alien sound, played on my senses. I listened intently for the cough of a Leopard or the threatening bark of a territorial baboon, but heard neither. It was only as I was about to place my head upon my backpack/pillow that I saw it. The large, dark, un-mistakable shape silhouetted against the fire, tail curled, ready to strike. My reaction was instant, born of fear and with adrenalin pumping I lunged at the impostor, hurling him into the fire.

The reassuring smell of burnt scorpion, better than bacon, allowed me to return to a fretful night's sleep.

That first 24 hours in Chimanimani, encapsulated perhaps, just some of what makes Outward Bound special to so many. A time of fun, challenging adventure and new experiences underpinned by a sense of personal achievement, commonly shared between students and Instructors alike.

Bill Bailey and Owen Davies died some years ago. Both were the best of men. Leading by example, they encouraged all who attended the school to understand, each through their own experience, what was meant by the Outward Bound motto: "To serve, to strive and not to yield"�.