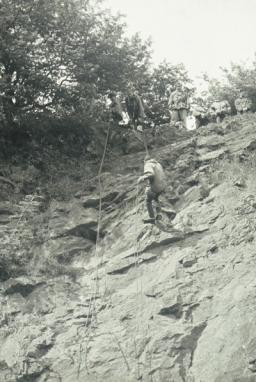 All in all it produced an overpowering feeling of achievement, which is what Outward Bound is all about...

Part of the Blue Funnel Line (Alfred Holt & Co) induction process for its trainee ships officers was a course at Aberdovey. The Midshipmen, or Middys as they were known, accepted this as it gave them a practical feel for matters nautical ahead in their next four years at sea. This, of course, was a continuation of the very purpose that Lawrence Holt and Kurt Hahn had founded Outward Bound for in the darkest days of WW2 to give the Alfred Holt sea staff a glimpse of the challenges should they have to abandon ship and survive in a lifeboat.

Because I joined Blue Funnel's DIOMED in Sydney, Australia in December 1950 for the ship's return voyage, by the time I arrived at Aberdovey in May 1951, I had already had five months sea time as a very junior middy. So, I did not consider myself the typical, just-out-of-school, 'off to Outward Bound and off to sea' middy ; I thought of myself, even if only 16 years old, a good way to being a seaman and a world voyager... Confidence and conviviality flowed out of me...

Here, at last, I was at Aberdovey, about which I had read so much. As well as this knowledge, I had heard many tales from the DIOMED's three other middys. I, therefore, arrived thinking that I knew everything and probably, intolerably, showing it!

The reality of the responsibilities of being appointed a Watch leader was in stark contrast to the bombast and woolly idealism that I had arrived with. For the first time in my tender idealistic teenage years, I had to lead a hut, inhabited by as disparate a group of male youths as could have been assembled in the pages of fiction.

The fortnight is remembered as a montage of experiences in settings of great beauty - from the unforgiving weather out on Cardigan Bay, to the cold tides of the Dovey on those early morning swims - and one thing that got us (naked) into the water, was the sound of an approaching train... and from the loveliness of a Welsh spring day, to the rain-swept day trekking up Cader Idris and getting the Watch back home as the first team in.

(Andrew kindly posted us this story and we have uploaded it to the website with his permission.)