Alfred Briggs
Back to alumni stories 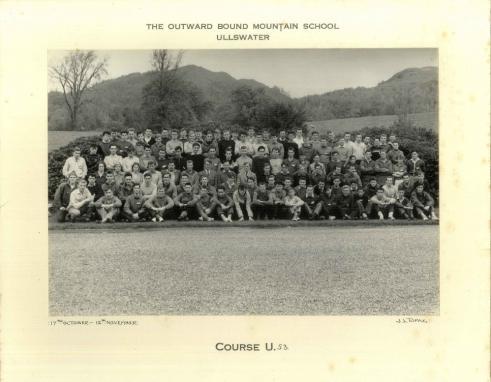 Course U 53, from 17.10.60 to 12.11.60 My nick-name was Eddie Briggs. At age 17 years I lived on my own in Bradford, West Yorkshire, in bedsit land, and I had joined a group of lads who were doing the Duke of Edinburgh's Award. I got pals with a lad named Dale Hannam who shared the same interests as myself. We spent all our weekends and holidays camping, rock-climbing, potholing, canoeing, walking over the moors, hills and fells, using map and compass. We both went on a Dalesward Bound Course at Linton CAMP, near Grassington, which was run and organised by Bradford Education. There was a school teacher who gave a lot of time promoting the Duke of Edinburgh's Award, a Mr David Woodcock. It was this gentleman who got my employer and Bradford Council between them to make a contribution towards the costs to attend Ullswater Outward Bound School. My employer was reluctant to let me off work for a month, as I was an apprentice baker and confectioner and I already had the Mondays off to go to bakery college; it would have meant other people having to do more whilst I was away for a month.

My journey started when I met my friend at the railway station in Bradford Forster Square. The journey took us past our usual tramping ground Whernside, Penny Ghent, Ingleborough, way over Shap and into the unknown. We could not comprehend what we were letting ourselves in for. Off the train we got. There were loads of lads waiting to get onto a bus; there was no hanging about. It was all in the bus - me and my pal sticking together like glue. Lads were chatting but a bit subdued. By the time we got to the centre it was getting dark. Off the bus we got - loads of lads all over the place. There were Instructors there calling out names; then I realised my pal and I were separated. I did not see the point of separating two pals, this was not to be appreciated for some time; wisdom does not come overnight. We were divided into groups named after famous explorers - I think mine was Tensing or Shackleton. Sadly I can't remember my instructor's name, but we were bunked above a garage-workshop outside of the main building.

I can remember the first morning we were woken up at 5.30am by our instructor, "Everybody up?"� was the cry. We all jumped up out of our pits. "We're off for a dip in the lake"� was the cry. We grabbed our swimming trunks and we were off running down to the lake. On arrival at the lake, we started to put our trunks on. "Off with them,"� was the cry, "you won't need those."� In seconds there were a load of lads running on the pier screaming and shouting, leaping and jumping into the lake and it was freezing cold. There were some big lads who went in but we were all small when we came running out. We were sorted for the rest of the day. That was the start of our first day - that was a wake-up call, an introduction to what was to come. From then onwards we did not need telling what to do first thing in the morning. I recall doing first aid, map-reading using the compass, e.g, from grid to mag add etc. Then there was the assault course with an aerial runway, canoeing on the lake, learning how to rescue someone after their canoe had turned over, also taking care of ourselves after turning our canoes over. Then there were the long hikes on Helvellyn, Stickle Tarn. I recall we were caught out in a heavy storm and all the school came out to bring us back to the centre, sodden wet through and we were loving every minute of it. Fell running - I loved it. Long after the Outward Bound, I was in a cross country team that won the BERLIN CROSS-COUNTRY CHAMPIONSHIP. At the time, I was thinking of running up the fells at Ullswater Outward Bound.

The school is a part of you for the rest of your life, for as long as you live. There was the EXPEDITION, three nights camp and four days walking, navigating by map and compass, carrying everything we needed - food, clothing, tents, sleeping bags, ground sheets, waterproof gear, lights, first aid, small stove - it took some putting on your back. I recall it was really heavy - how I got out of the school gate I don't know, but four days walking over the fells and up the mountains. There was determination within the group, and as a group together we did it. We were lads at the time - no grownups with us. When we arrived back at the centre we knew within ourselves we had achieved an expedition on our own as a group - we had survived, we had been somewhere on our own where we had never been before and returned safe, clapped-out, but well. Sadly time was getting closer to the end of the course and we were only just getting settled in when it was time to depart. It was a sad time for all of us. On the bus back to the train station you would not believe the songs we were all singing together. We sang loud and long as if we knew we would not see each other again. O' what a fantastic bunch of men going back home - the opposite of the lads that came to the Outward Bound school four weeks ago. [Yes, with you for the rest of your life - one hell of an adventure.]

Eddie Briggs, ULLSWATER OUTWARD BOUND SCHOOL TO SERVE, TO STRIVE AND NOT TO YIELD.

(Eddie kindly emailed us his story and we have published it on the Generations website with his permission.)